Looking back at Game 3 of the NLDS

BASEBALL IS A GAME OF INCHES.

Share All sharing options for: Looking back at Game 3 of the NLDS

This is the second part of a continuing series that asks the tough question, "Wait, what in the hell just happened?" The San Francisco Giants needed to go into Cincinnati and sweep the last three games of the NLDS to advance, which was pretty much impossible, so I don't even know why we're still pretending they won the World Series. This is all very dystopian sci-fi, part Jacob's Ladder and part Matrix, which probably means we're going to wake up covered in goo in a horrific, non-championship world. More goo than usual, even.

Until that day, we can skip along blissfully and ignore the likely truth. My name is Grant, and my favorite baseball team won the World Series. Here is but one of the stories related to that implausible fact.

I still have no idea how the Giants won Game 3 of the NLDS. They were emulsified by Homer Bailey, who was having an out-of-body experience all night. He allowed three runners, and the only reason he didn't shut the Giants out was because he allowed two of them right before the pitcher's spot in the order. Ryan Vogelsong got the bunt down on the first pitch, Angel Pagan hit a fly ball, and that's the reason there was a 10th inning in the first place.

In that 10th inning, the Giants took the lead. It would have been more stylish if they did it with a Buster Posey home run, but they Padres'd the Reds to death. They couldn't have done better if they smoked a lock of David Eckstein's hair. A few things about that inning:

A hit that snuck through

Buster Posey started the inning with a hard-hit single, but Hunter Pence followed with this:

It wasn't a true bleeder, but it wasn't hit that hard. I'm surprised Scott Rolen didn't dive for it, really. That, uh, wasn't the best defensive inning of Rolen's career.

GameDay said the pitch sequence was mostly sliders, but it didn't look like a slider, it was 93 m.p.h., and PITCHf/x classified another 93-m.p.h. pitch with more movement as a fastball. Whatever it was, it wasn't a traditional, big-breaking slider, which is Pence's kryptonite/DDT. Broxton was probably one of the only pitchers on the Reds' staff who didn't have the pitch that Pence couldn't hit.

Without Jonathan Broxton's existence, the Giants are still oh-for-San-Francisco in the World Series. It's perfectly acceptable now to get a Giants jersey with Broxton's name and number on the back. He didn't even pitch poorly -- he allowed one solid hit and struck out the side. He's just our spirit animal, I guess, guiding us where we need to go.

Sergio Romo was on deck. A walk to Joaquin Arias would have loaded the bases and forced the Giants to take Romo out of the game. Tim Lincecum was warming up.

I'm not going to blame Dusty too much for this one. Getting Romo out of the game probably isn't as important as letting Broxton work with a margin for error, especially considering that Lincecum was the reliever, and he could pitch three innings or more. With the bases loaded, a 1-0 count becomes a fastball count, which is probably the worst place you want to be with Hector Sanchez.

Still, a lot of managers would have taken that risk and forced Romo out of the game. That might have led to a hard-hit ball right at one of the Reds instead of the chopper that won it.

That put a runner at third, which scored on the subsequent error from Rolen. When people say the Giants got lucky, it doesn't have to be an insult. It usually is, but it doesn't have to be. The Giants won the World Series because Ryan Hanigan, an excellent defender, made a mistake that he'll make every 40 games or so. Bochy didn't build a passed-ball ray and shoot it at Hanigan from his nostrils. The Giants got lucky. When people say that every championship team enjoys a little good fortune, this is what they're talking about.

And it took skill, too. Posey was on third because he can hit. But don't take offense to the luck. 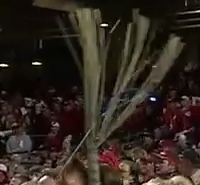 That really did ruin everything for the Reds. Nice job, lady. Cool broom.

It had to be just bad enough. Look how far to the end of the bat this was: 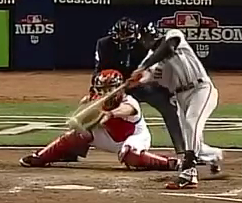 He was way out in front of a 95-m.p.h. fastball for some reason. If Arias hit the ball too hard, Rolen would have been able to set himself for the grounder.

Dusty taking Bailey out after 88 pitches

The reason the Reds had to rely on Broxton in the 10th is because Aroldis Chapman pitched the ninth, and the only reason he pitched the ninth was because Bailey went only seven innings. The Giants might have won the World Series because Dusty Baker didn't keep his starting pitcher in the game. It's about time, dammit.

The Giants had to win 11 games for the parade to happen, but this was the one that still baffles me. Sure, hit a bunch of dingers off Justin Verlander. Pounce on Chris Carpenter twice. Have a game or two Barry Zito. But Game 3 of the NLDS is still the one that makes me wonder how the Giants got away with it all.