Emmanuel Burriss and the end of an era

Share All sharing options for: Emmanuel Burriss and the end of an era

Emmanuel Burriss is gone, electing free agency instead of an assignment to the minors. I wish him the best of luck. We won't have Emmanuel Burriss to kick around any more, or his dog Checkers. It's the end of an era. Also, Checkers had three more doubles than Burriss over the last five years.

See? Can't resist a parting shot. And I hate myself for it because Burriss seemed like a nice enough guy. Considering the vagaries of the draft, he was almost something of a success story; there were 17 position players selected in the first round of the 2006 draft, and Burriss had more at-bats than 10 of them. Part of that has to do with the opportunities that the Giants were able to offer, but it also speaks to the fact that most players selected in the draft, especially as far down as Burriss was, don't make it to the majors at all.

So why was he such a favorite target for Giants fans? A lot of reasons, with most of them doing with his relative skills in the baseball arts. But I'd like to propose a theory: Emmanuel Burriss was the last link to the olden days of misery. He represented a time when we would lick crumbs of hope like lollipops, hoping to savor them for a while instead of just wolfing them down. Check out this actual thing that an actual writer actually wrote in an actual paper based on actual quotes from an actual big-league manager:

For now, Ivan Ochoa is the starting shortstop and Emmanuel Burriss the second baseman. Is that a preview of the 2009 starting middle infield? The Giants' brass is asking the same question.

"It's very possible," manager Bruce Bochy said. "That's what we're doing now, taking a look at them. It's early, but I think they work well together, and they're getting some hits, too."

That passage was lifted straight from the Voynich manuscript. Scholars will fight over its meaning for the next century because it couldn't possibly mean what it reads like. It has to be some sort of code or cipher. But until then, we can only assume that the Giants were actually serious about an Ochoa/Burriss double-play combo, even if only in the abstract. Then, 20 months later, they won the World Series.

I'll admit to being fooled, too, so it's not like I can get too haughty. In 2008, Burriss had a .357 OBP in 274 plate appearances, so it wasn't that crazy to think he could develop into something more. He did not. I made a graph of the seasons between 2004 and 2010. It's supposed to show the rough spectrum of happiness/unhappiness as a Giants fan, along with the player who most symbolized that season. 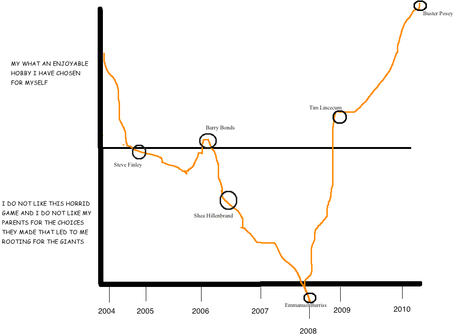 That's how we were feeling at the time about the team, at least. If you want to do a retrospective analysis, it was the call-up of Pablo Sandoval that ushered in the new era, though we didn't know it. But the player of 2008 was Burriss. He was a reason for hope back then. And you knew there was something wrong with that. Same thing with Fred Lewis. But you would ignore those thoughts.

There would be debates on this very site about both players, ostensibly because some of us believed them to be a part of the Giants' future. But what else could we do? Check out until 2010? Sure, I probably could have written a novel in the time I spent watching and writing about baseball between 2008 and 2010, and it would probably have been wildly successful and the Hollywood option would have paid for a house instead of the apartment with the decades-old carpet that I'm in right now, but ... no, wait, that's what I should have done. Dammit. At the time, though, the only alternative was to follow the Giants and hope like hell.

The Giants had 28 players take an at-bat for them in 2008, and the average age of the players was 28. Of those players, only eight of them took an at-bat for any major-league team in 2012. Only one of them was a starter five years later. That was not a team that was overstuffed with hitting talent. Burriss was one of the best, actually. Which is the point.

I doubt we would have even noticed if he weren't a starter at any point, or if the Giants had a reasonable set of middle-infield options in those years. If he moseyed up to the big leagues, took a few September at-bats, and hung around a couple rosters as a 25th man, we wouldn't have noticed him. Instead, he became a player attached to an unfortunate era of Giants baseball through no fault of his own.

I wish him the best. And the last three years have made it so that if he were to suddenly break out and have a nice, long career as a good utility option, I wouldn't be anything but happy for him. Before, I might have been a little resentful or envious. Not now. Best of luck, Mr. Burriss, wherever you may go.

And never forget, this was his only major-league home run.

Yeah, I'm in marching band, so I was there.