An Apology to Brian Sabean

Look, if Apple fires employees who don't apologize for releasing unpopular software, then it stands to reason that SB Nation will terminate me for not doing this.

Share All sharing options for: An Apology to Brian Sabean

You have been the general manager of my favorite sports team for more than half my life. As a result, a lot of what I know about you, and my opinion of you and your baseball decisions, has evolved as I’ve grown up. I do not consider myself to be a mature person, however, and as a fan, I doubt I will ever have an entirely rational perspective of my team and your role as part of it, yet it is worth noting that you have constructed a team that has twice now done what I assumed would never happen in my lifetime: win the World Series.

As a Bay Area child growing up during the Montana-Young years, instant, excessive success was the only thing I knew. That the Giants could not be what the 49ers were was always a sticking point, because no matter how great watching those teams was, they still were not a baseball team. Baseball is the best, of course, and I wanted my favorite baseball team to be the best. I, of course, had absolutely no clue how difficult it was to be "the best" baseball team every single year.

So I got ticked off when you traded away Matt Williams. I lost my mind when you traded Bill Mueller, insanity made worse by the desperate attempts to fill third base following that trade. I remember throwing my wallet – the only item handy – across the room, spilling its contents all over our living room, after you traded Shawn Estes for Shinjo and Relaford. I was more confused than a pug staring at its reflection when you got back Bill Mueller at the end of 2002, but too late in the season to put him on the playoff roster. I was crestfallen when you gave away Russ Ortiz for a merkin. You signed Armando Benitez and punted a draft pick to sign Michael Tucker.

Some say you deserve a pass for the Barry Zito and Aaron Rowand signings. Okay, but those were still bad moves before, during, and after (#RallyZito being a mega-bright spot where Zito is concerned, of course) their terms. I recognize now that you were desperately trying to keep the Bonds train running and had little regard for the future. As you mentioned in your impromptu presser following the Matt Williams trade, rebuilding is not an option. Well, as a 49ers-raised sports fan, that’s a sentiment I can appreciate. I may have completely disagreed with your methods, but I certainly enjoyed the success from 1997-2004 (well, until the last day of 2004).

When the team tanked starting in 2005 you then became the easiest scapegoat that was ever scaped, and your previous methods could be used against you in my court of law. I knew then as I know now that not every move would work out, and it would be unfair to criticize every single move that didn’t work out just because it didn’t work out, but I didn’t understand why you did some of the things you did. Why trade two starting pitchers when you needed pitching? Why trade a third baseman when you needed a third baseman? Why sign a closer for lots of money when it’s possible to find closers for less? Were you just a few years behind the times or too stubborn? Was the farm system unimportant because of Bonds and butts in the seats? Would be impossible to contend and reload simultaneously? Do you not see the error in having to pay for replacement players instead of pulling from the farm which prevented any pursuit of, say, Vladimir Guerrero?

What compounded all of this were previous statements that revealed a person who was, in my fanatical estimation, stubborn and proud of it. Your "I’m not an idiot" press conference also had this bon mot: "I didn’t know we had this many fans. You sure don’t see ‘em at the ballpark." Later, you’d come to call some of the fans "the lunatic fringe" and that those fans (like me) adversely affected season ticket sales. So the way I saw it, you were being a jerk on top of being stubborn. On the other hand, if people like me were taking shots at me I’d probably be a jerk to them from time to time, too.

And because you stuck around for so long and did literally hundreds of interviews, your public persona and penchant for certain types of moves became well-known. It didn’t matter that you knew more than I or the fans knew about what was going on behind the scenes, because in front of the scenes there was much Hillenbranding and Morrising and losing. You became a character in my mind. I mean, I even wrote a TV pilot about you out of frustration following the 2009 season. Before that, I made this image and posted it on the Internet (the Internet is what you use to Google, btw. Oh, and btw is an abbreviation of "by the way"): 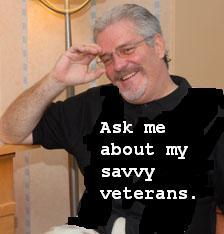 A clear lack of maturity and photo editing skills on my part here, to be sure. I was young and petulant, and in my youth and petulance I lashed out. But you’ll forgive me for considering the draft pick punting, short-sightedness, fan-blaming, and losing as a sign that it was never going to happen. The Giants would never ascend to the top of Baseball. Sure, they could probably muddle through some success as they had already in my lifetime, but they’d always be missing that certain something, that… oh, I don’t know, dominance.

Instead, you went ahead and built the best Giants team I’ve ever seen. You’re also the architect of the most successful run in San Francisco Giants history: a .538 winning percentage (postseason included) from 1997-2012 with 2 World Series wins, 3 NL pennants, and 6 playoff appearances overall. They say you’re a great manager who has no problem delegating responsibilities; any article written about the front office (non-Jenkins division) since 2010 has been quick to mention the contributions of John Barr, Dick Tidrow, Bobby Evans, and Yeshayah Goldfarb to the team’s success, but just as you have been the public face enduring the wheel kicks of criticism, so should you become the oft-kissed face for the Giants’ success.

I was wrong about you insisting on Freddy Sanchez. Maybe you do have a fetish for Freddy Sanchez, but maybe he is also your Sabeanic ideal of what the organization wants: a high contact, low-strikeout hitter. Wanting players who put the ball in play is not necessarily a demonization of walks and strikeouts, but merely a preference for putting the ball in play. We saw in these last two playoff runs how putting the ball in play can lead to better situations than strikeouts (except in the case of Pat Burrell facing Cliff Lee, I suppose). And, too, Freddy Sanchez is a quality defender, a desirable skill set you’ve expressed a keen desire for since the post-Bonds era began.

I was wrong about how you were going to handle Buster Posey and Brandon Belt. They both got their chances and they played, and the organization showed a commitment to them through rough patches. I’m hella annoyed by the custom catching setups, but I have to believe that if you could answer the question without repercussions you’d say that the team is at its best when Buster Posey is catching as often as possible.

I was wrong about all the times the organization drafted pitching over offense. The Giants have hit only 12 home runs in the last 6 years (all in the playoffs), but the pitching has been so impressive it hasn’t even mattered. You made me a believer in pitching and defense to such a degree that I am with you in believing that runs should not only be at a premium, they should be outlawed, and that every baseball contest should be decided by which pitching staff looked the most dominant after 9 innings. Hits, walks, runs, etc. would be called "not outs" and home runs would be referred to as "failure balls."

I’m kidding. I love offense. I love watching players who can hit. You have been able to put together a pitching staff that masks a lot of the can’t-really-hitters that often populate the lineup (out of necessity, of course). That is impressive. You’ve taught me to believe that "just enough offense" can win the day if the pitching is airtight.

But I loved the Beltran trade. I was glad to see the pitching that had been drafted could also be used to trade for a fantastic offensive player. Carlos Beltran is likely to be the closest the Giants get to Barry Bonds for awhile and I appreciated the "go for it" nature of the deal. If you can get Carlos Beltran into the playoffs, you have a chance to make a lot of noise. You knew that, I knew that you knew that, and I’m glad you did it, especially after the Giants had done something the previous season I thought they’d never do in any season.

You said something after the SECOND World Series win that really stuck with me. You said this 2012 team has a lot of character, that they are good people. Character counts. I really believe that. Talent wins, of course, but that you even chose to recognize the power of good people meant a lot to me.

I remember very clearly the tears in your eyes following the end of the World Series in 2002. Even through my rage tears I could see how broken up about it you were. You said something to the effect of "these guys played their guts out, sacrificed their whole careers to do this," and that it was very hard for you to watch so many of them come so far only to be turned away at the very end. I was heartbroken because my team lost. You were heartbroken because the people you genuinely cared about were hurting. In the case of Robb Nen, he gave his career. You knew that. You grieved for him because of that. And you cheered for these 2012 guys because you saw them every day playing their guts out, scratching and clawing to stay alive. I was impressed, overwhelmed by their effort, genuinely proud of "my" team because they did something that was impressive and worthy of pride. I was happy because of them, but you were happy for them.

If that’s not a leader or someone worthy of my respect – and, of course, my most sincere apology – then I don’t know who could be. I am an idiot, Brian Sabean. I’m sorry for ever thinking you one.