The Giants lost their first series since Melky Cabrera was suspended, and the Dodgers played their last game of the season.

I had an Orioles game and a presidential debate going on at the same time as the Giants game. I felt like Ozymandias, except I was cracking out on pointless nonsense. So I don't have a ton of takeaways from this game. But there are a couple.

Let me start over: The Giants have to start Ryan Vogelsong in the playoffs.

There are people who hate Barry Zito irrationally. When Bruce Jenkins wrote his fan-fic about the Giants possibly releasing Zito in the spring, there were people who were excited. Get him out of here. No good Zito not good for nothing nohow. That was never the position of this site. He had his uses. He was often functional. His 2011 had a good chance to be an anomaly, not a trend. Zito is Zito is Zito.

Or to put it in a way that the back-of-the-baseball-carders can understand:

You can convince yourself that Zito was pitching better at the end of this season, that he'd found his stuff. You could have argued the same thing after Zito's start on May 16, 2010. He'd figured something out, everybody. He was 6-1, with a 2.15 ERA. After that game, he went 3-13 with 4.90 ERA.

Those are selective endpoints, specifically chosen to bolster my argument. Seems unfair and wily until you realize that's what the pro-Zito faction is doing. Look at them, over there, all smug and knowing, telling us what's best for our team? All they're doing is using selective endpoints, too. Do you remember that Zito was pulled after 2.1 innings just over a month ago? Why? Because he was Barry Zito. This isn't the twist to a Scooby Doo episode, dammit. When you pull off the Barry Zito mask, it's actually Barry Zito under there.

Which is an impassioned plea for Ryan Vogelsong. If he came out on Wednesday night and looked like a slim Tyler Walker, okay, I'd listen to a Zito argument. That curveball is looking nice, alright. But Vogelsong looked like the guy who made the All-Star team last year, and who got jobbed out of an All-Star berth this year. He looked like the guy we're used to: 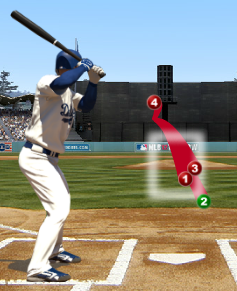 That was a four-pitch strikeout of Luis Cruz. Look at the velocity. Look at the location. Remember the Vogelsong who racked up the quality-start streak? The guy who appeared in more consecutive six-inning starts than anyone since Gaylord Perry? That's him! That's the guy! He went out for a pack of smokes or something, but he's back!

And y'all talking about Zito? Come on. We're six years in. You know what kind of odds you're getting. He'll do well enough every fifth day to keep you away from the Jeff Suppan dispenser. But we're talking about the playoffs.

Not a Zito hater. Just a Vogelsong lover. And against the lefty-thumping Reds, it shouldn't even be a choice. This game was utterly and wholly meaningless, except for one thing: I wanted to see Ryan Vogelsong look like his old new old self. And he did.