If I had access to players, this site would be awful. More so, even. If I found out that Aaron Rowand is the kind of guy who sends your kids a birthday card after meeting them briefly, I wouldn't be able to separate the person from the player. I'd be quick with the excuses for a player I liked. It's better to think of them as actors in an elaborate dinner theater production.

And if I had a player earnestly tell me this …

"I think I’m preparing a lot better this offseason as far as Pilates," Huff said as he and his family were driving back to Arizona from a holiday vacation in his native Texas. "I’m feeling physically better this year.

But I don't know him. He's a guy who can make me happy or angry based on how he performs at his chosen profession, which is weird when you think too much about it. So I don't. Instead, I just think, boy, that best-shape-of-his-life canard is sure silly.

It doesn't help that we watched him hit last season: 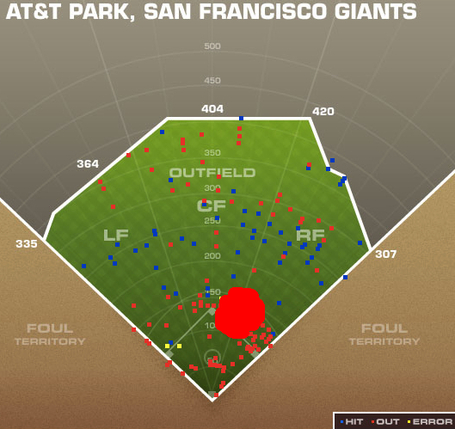 The Giants are big on the Crazy-Enough-That-It-Just-Might-Work Philosophy. Lucky us. Here's something I can't shake, though: Huff has messed with us before. When the Giants signed him before 2010, he was coming off a season where he was quite literally one of the least valuable players in all of baseball. The Giants signed him, he hit like vintage Fred McGriff, and the Giants won the World Series. That buys a few benefit-of-the-doubt credits, even if it isn't logically sound to hand them out.

Which is to stay that I still hold out some hope for Good Aubrey to return. Ill-advised, poorly thought out hope. But still, hope. And I can't shake it. I'll continue to laugh at the best-shape-of-his-life stories, but secretly I'll be hoping like hell that they mean something. Hoping like hell is the new Giants' way, after all. Huff went from washed up to middle-of-the-order threat before -- why couldn't he do it again? Besides all of those legitimate reasons, I mean?

I'm even occasionally willing to forget the worst-case scenario: something in between 2010 and 2011 that isn't good enough to help a team, but plenty good enough to convince Bruce Bochy that he's the team's best option. Brrrr.

If I ran the team, Huff wouldn't start. He might not even be on the team if another team was willing to pick up just $1 million of his salary. Huff is one of the most inconsistent players in baseball -- he's put up OPS+ of 137, 81, 142, and 90 over the last four years. That's absolutely schizophrenic, but it's not going to improve with age.

As long as he's here and starting, though, I might as well confess that I'm secretly holding a good thought. It's stupid, but so am I. And so is this stupid offseason.