Just realized that for all of the Carlos Beltran-related hand-wringing, there aren't nearly enough Zack Wheeler complaints on the front page. I'll write a little sticky note for my desk and put it with the rest. 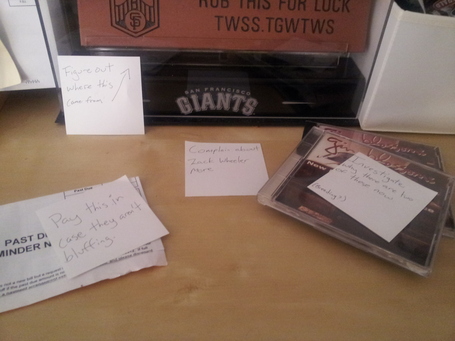 It's insane that the Giants traded their top pitching prospect for two months of Carlos Beltran. With the benefit of hindsight, it's such an obviously terrible move to make for a free agent a team has no intention of re-signing. When it went down, it didn't seem so bad. Watching the 2011 Giants hit did that to right-thinking people.

But I might be in the minority when I say that I'm glad it wasn't Gary Brown, as was first rumored. Tim Lincecum's going to be a free agent in two years. Matt Cain might be. There isn't a lot of pitching depth at the upper levels of the Giants' system. The 2014 rotation could be Bumgarner/Surkamp/Marquis/Suppan/Zito (after the option kicks in), so it would have been pretty keen to keep Wheeler around. Still, I'm irrationally attached to Brown. Giants hitting prospects are rare birds of paradise that you can't just get at a Costco, and I trust the team to develop pitching.

That's the way it used to be, at least. There was a decade or two of hitter-free development, but that rap can probably get retired if Brandon Belt becomes a starter in 2014, which would mean that over a third of the lineup would be homegrown (and pretty danged good). And if Gary Brown comes up and does what he's supposed to, that's half of a homegrown lineup. Who'd've thunk it? I guess it's not that big of a deal -- they've had 50% homegrown lineups before! -- but they haven't had a good one since the Clark/Williams/Thompson days.

So I probably shouldn't get irrationally attached to a young Giants hitter just because he's a young Giants hitter. This isn't the Todd Linden Era. There have already been some great hitters who came up through the farm. Probably should just evaluate each prospect on his own merits and consider where he fits into the organizational plan, not based on an antiquated notion of how the Giants are cursed when it comes to developing hitters.

With that in mind, then, here's what I expect Gary Brown to do:

And here's what I expect Zack Wheeler to do:

The set of expectations for Brown is exotic and mysterious. It's like reading the lurid descriptions of the natives in a piece of colonial literature. So different. So compelling. You can picture whatever you want in your head. A leadoff/center-type like that is something that the Giants haven't seen since the days of Brett Butler, but this one would have better defense. Andres Torres's best year, but with average and more vrrrooom. He doesn't just have a chance to be a "good homegrown hitter" -- he'd be a different species of "good homegrown hitter."

Wheeler might be just as valuable. Could be more valuable. You can get out your WAR calipers and measure away, and if you prefer Wheeler, well, you could be right. There's a reason why he's generally rated higher on the prospect lists that are coming out. But I've seen good pitching. It's fantastic. That grass on the other side of the fence seems greener, though. Imagine! A speedy defensive wunderkind who can get on base a little bit!

I'm hoping that a) Brown starts at AAA this year, b) he tears the place up, and c) that Angel Pagan hits and fields well enough where the Giants don't have to bring up Brown until September. The Giants' farm system is the antonym of exciting, other than the depth of good catching prospects. But Brown is one of the exceptions, and I'm glad he's still on the Giants.

Having Wheeler at the same time would be pretty cool too, dammit, but I'll write about that another time. I have a reminder about it and everything.