The Frustration of the Offseason in a Borrowed Graph

Share All sharing options for: The Frustration of the Offseason in a Borrowed Graph

If you missed it over in the FanPosts, there's a quality discussion going on about the Giants' offseason. Has it been a dud? Will the restraint pay off in the future? Would the Giants have been better off non-tendering Jonathan Sanchez, declining the option on Jeremy Affeldt, and using that money to retain Carlos Beltran?

Well, of course they should have done that last one. I'm pretty sure no one brought that exact permutation up in the comments, but it's my default hypothetical scenario for the offseason. And Lefty's too, but I was the first one to co-opt it after he initially wrote it.

All told, though, this hasn't been an especially offensive offseason. The Giants didn't trade Matt Cain for a catching prospect, and they didn't trade away Brandon Belt to free up a spot for Brett Pill. They didn't re-sign Orlando Cabrera, nor did they extend Melky Cabrera for five years the second they got their hands on him. This hasn't been an offseason of "They did what?" The absence of stupidity isn't the same as the presence of genius, but the Giants didn't make a truly damaging trade or signing.

The mood ring around these parts is mostly glowing the color of bitter, though. But in that FanPost, there's an intelligent and earnest discussion about the Giants' offseason. Not sure how that happened on my watch. There aren't even any cat pictures or Dune debates. And in the midst of it all, dregarx posted this graph:

The graph comes from this Baseball Prospectus article, which took its figures from Baseball Between the Numbers. It's everything I've been yammering about, presented in a nice, neat graph form. It's not just the perfect graph because it makes me think of an angry wizard. 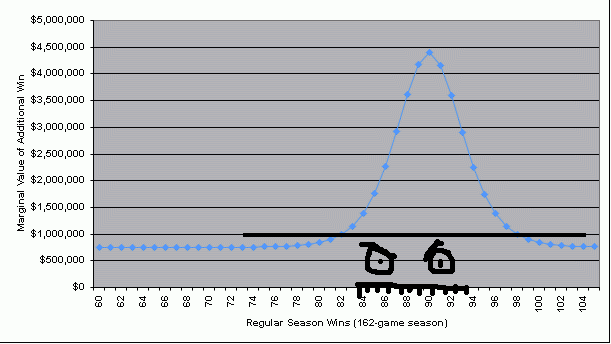 But because in the middle of that graph, where the value of an extra win starts to spike, there be Giants. That's exactly where the Giants should expect to be in 2012. Somewhere between 81 and 91 wins. Worse if things implode; better if everything goes their way. And based on Silver and deMause's research, every incremental improvement a team makes in that bubble is one step closer to that sweet, sweet playoff revenue -- that gooey, sticky nectar that adds a million or thirty to the franchise coffers.

I don't know if the Giants are going to look like a 70-win team heading into 2013 or a 100-win team. No idea. Too much can happen. But I know that they look like an 80/90-win team right now. As such, every missed opportunity to get to the right side of that wizard's hat there would have made sense from a baseball perspective, and -- here's the annoying part -- it probably would have made sense from a financial perspective too. That's what was so frustrating, and what was so hard to put into words. The Giants were claiming that financial reasons were keeping them from adding a player like Beltran (or Reyes, or Rollins, or even Furcal …), when that's exactly why they should have done it.

Your mileage may vary based on how much credence you give the Silver/deMause numbers. It's not like the Giants have a bunch of temps running the financial side of things over there -- I'm sure this is something they've studied pretty extensively, and they've reached a different conclusion.

But on the surface -- and especially considering that the Niners are relevant again for just about the first time in the history of AT&T Park -- this sure looked like a great time to spend money to fix what was obviously broken last year. And that's not just from the perspective of a whiny fanboy, either. It looks like that might have been a pretty sound business strategy too. That's what is so danged frustrating about the one-man Melkavalry of the offseason.