Images of the Giants winning the World Series

The images are presented in both a moving and still format.

Share All sharing options for: Images of the Giants winning the World Series

I'm watching a press conference right now. Matt Cain is being interviewed. He has post-apocalyptic ski goggles on. You know, to keep out the champagne. From the World Series victory.

Clayton Kershaw tied a major-league record by not allowing a run during the entire postseason, you know.

And in what has become a little tradition around these parts, here are some of my favorite images of the 2012 World Series, both animated and still.

First, the still images. They're worth 1,000 words, I'm told. And lost in the scrum were two indelible images for me. The first was Will Clark looking like a kid in the dugout: 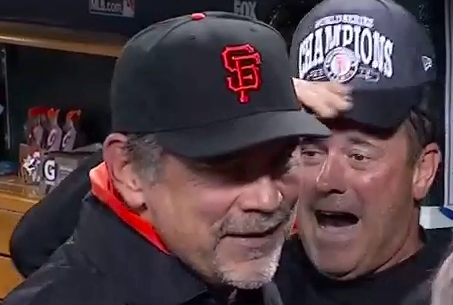 Will Clark ended his playing career with the Cardinals. There was a chance that the last image we had of Will the Thrill in a uniform was one in Cardinal red. Instead, he jumped on Bruce Bochy after the final out of a Giants World Series win. Yep.

For as much as we like to complain about Candy Maldonado's slide, or the earthquake setting Dave Stewart up to pitch two of the first three games of the World Series, Clark lived those. He was the embodiment of Giants baseball, and he had to wear those disappointments for decades.

Now, he gets to celebrate with the Giants, who have won their second World Series in three years. 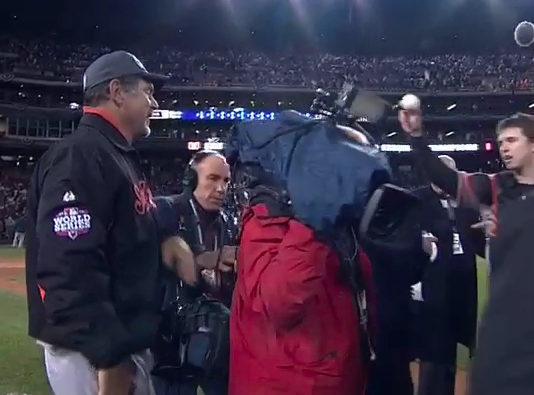 That's Buster Posey seeking out Bruce Bochy to hand him the game ball. Not pictured: Russ Ortiz. Here's a GIF of Posey hugging Bochy, then Clark:

Back in the day -- like, way back before the Giants had won a World Series since moving to San Francisco -- one of the posts I was proudest of writing was this one calling out Bochy for not playing Posey in 2009.

Well, whatever, you're right. That post sure looks stupid now. Whatever you did, it was the correct decision, Bruce. I defer. I defer for the next forever. And now that catcher you nurtured is here with a game ball for you. It's the ball from the strikeout that concluded your second championship season. Cool. So cool.

Here are the three strikeouts from Affeldt:

Here are the three strikeouts from Romo:

I love the symmetry. The Giants needed to avoid the other team scoring runs. The Giants were supposedly the lucky team lucking all the luck in Luckylvania. What's the best way to avoid the vagaries of good luck and bad luck? Striking fools out. Affeldt struck out the middle of the order in the eighth, and Romo struck out the top of the order in the 10th. It was sublime.

I'm not entirely sure what this postseason will be remembered for, but I'm thinking defense will be a big theme. That's kind of funny, seeing as I don't trust the center fielder, right fielder, third baseman, or second baseman to make an extraordinary, extra-rangy play, but it will probably be one of the stories of the 2012 postseason.

Really, what they'll be talking about is Brandon Crawford, with a good helping of Gregor Blanco mixed in. That up there was but one of the plays.

So Buster Posey hit someone in the head with a home run. If I find out that the unfortunate fan was actually hurt, I'll delete this part. Until then, I'll assume the fan was a communist.

Did you hear Ryan Theriot's war cry after he scored the winning run of the World Series? It's here, and it's glorious. But before the war cry, there was a gentle, slow-motion slide into home.

So beautiful. So serene. The tickle of a smile on his face.

This was not serene:

But there you go. That's my favorite. The 28th-rounder saving the World Series clincher, and a slow reveal to the minor-league free agent exulting to the heavens in the background.

The Giants won the World Series, everybody. This is why you're a baseball fan.