Theriot is not playing second. In case you were worried about that.

Don't know about you, but I learned to trust the Giants blindly a long time ago when it comes to pitching. The Pirates have been trying for 20 years to pick an ace in the top third of the first round. They got, what, Kris Benson and Paul Maholm to show for it. The Giants picked up three top-of-the-rotation pitchers with first-round picks over a six-year span. I figured that had to do with a little luck, a little draft positioning, and a lot of organizational aptitude.

It extended beyond the first round, though. When the Giants brought in Ryan Vogelsong as a minor-league free agent and invited him to camp, there must have been something that someone somewhere saw in him. The bullpen is usually cheap and/or effective. Even when taking guys like Matt Morris or Todd Wellemeyer into account, I learned a long time ago to shut my brain off and follow Dick Tidrow and Dave Righetti around like a puppy, agreeing with whatever they want to do in the most knee-jerk way possible.

That was before this season, at least. This season, every pitcher has been pinched by the Ambiguous Struggles Lobster*. Cain isn't himself lately. Vogelsong had a funky finish to the regular season. Lincecum has been an enigma wrapped in a riddle covered in a crispy shell of mystery for the whole year. The Giants haven't been able to corral all of that talent at the same time this year, and that's the first time they've had that problem with the staff since Lincecum started the season on the roster.

The most mysterious of all -- or, at least tied with Lincecum -- is Madison Bumgarner. He had an outside shot at the Cy Young as of, oh, July. He was robbed of an All-Star berth. He was close to the best pitcher on the staff. But at the end of August, something went askew, and he turned into Doug Davis. No one really knew why. He kept starting, and he kept getting knocked around. If the Giants knew what was wrong, they kept it to themselves.

He fixed something last week. At least, that's what the Giants are saying. Bumgarner threw side sessions, and everyone was happy with the results. Considering the Tigers have noticeable platoon splits …

… it makes sense to have Bumgarner start a game. A fixed Bumgarner is the Giants' best bet.

If he's fixed. It's unfair to suggest this is the start that will keep or break that blind trust that I have in the organization's pitching mastery, but it does feel like an easy tipping point to highlight. All season, there's been a slow, gradual erosion of that perceived infallibility. Which, again, is unfair. It's not like Righetti is controlling these guys with an Xbox controller. There's a limit as to how much he can do.

If Bumgarner does the same thing that he did against the Cardinals -- iffy command and flat sliders -- my precious little innocence will be lost forever. The next time the Giants say a problem with a pitcher has been identified and corrected I'll ... I'll ... furrow my brow and be skeptical like a fan of a normal team. And those people are just the worst.

So there's more to Game 2 than just a short-term thing, where the Giants have to win to avoid going back to Detroit in a best-of-5 series where the Tigers essentially have home-field advantage. There's an overarching, philosophical, long-term aspect to it too. Right now, I still cling to the hope that Dave Righetti is magic. I don't want to give that up.

The Giants are up 1-0 in the World Series with an unreliable Lincecum and Bumgarner, and a less-than-reliable Cain. Goodness, that would have been a bizarre thing to read in March. I still have faith in Bumgarner, though. A weird two months isn't going to shake that.

The lineup for Game 2 is, as you'd expect, exactly the same except for the #9 spot:

Will this be the night that Hunter Pence hits three home runs? Time ... will tell. 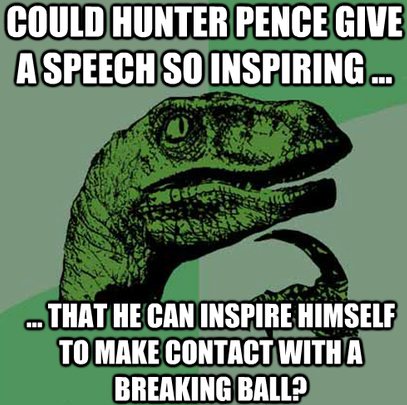 *Note: replace with something that's not as stupid before publishing