How poorly did Madison Bumgarner pitch in Game 2? Not as poorly as you might think.

Share All sharing options for: Madison Bumgarner: A Closer Look at Game 2

The Giants have lost two straight playoff games. You might have read about this. And when something like this happens, there's a need to find what went wrong. Or, more accurately, there's a need to pretend to find what went wrong. Angry people will come up with angry opinions. Depressed people will have depressed opinions. Here's what's wrong. There's what needs to be fixed.

This will be an image-heavy post, and while I'll dirty up the GIFs as much as I can to limit the file size, I don't see any other way to do this. It's not like I'm going to use my words. How gauche and outdated. So I apologize to the people with Lappy 486s and a megabyte of RAM. Your computer loved you very much, but where it's about to go, you can't follow.

I want to look at Madison Bumgarner's game from last night. And there's going to be a temptation to consider this an exploration of a pitcher's bad luck. I want to forget the word "luck." The Giants lost by nine runs last night. They had two hits. Anyone who blames Game 2 entirely on luck is living on a cloud sailing over a world of gray rainbows and bitey unicorns, and they're upset that their fantasy world was ripped asunder.

It's not luck. It's baseball. This is the game we follow.

First, about those nine runs. Five of them came after Madison Bumgarner left the game, and they were given up by lesser relievers. If Bumgarner didn't give up those runs, different relievers would have been in the game. So I'm counting the runs given up by Bumgarner as the true turning points of the contest.

That came on the first pitch. It wasn't buried on the inside like Posey wanted it, and it leaked out over the plate. Ludwick was looking for a fastball, and he got it.

Unfortunately, Ludwick didn't play in Bumgarner's shutout against the Reds in June, so we can't do an apples-to-apples comparison, but here's Bumgarner against Scott Rolen in that game.

The main difference between those two pitches: a couple of inches. But it was more about what the batter decided to do, and how he executed it. It's easy to think of pitching like a game of rock-paper-scissors, where you know the hitter has already chosen rock, and all the pitcher has to do is throw some paper up there. But it's more like a game of rock-paper-scissors with 78,298 variants. Sometimes you choose rock, and they choose paper. Sometimes you choose vinegar, and they choose subpoena. For every action the pitcher chooses, there will be a reaction by the hitter. And in a nine-inning game, all it can take is a single hitter's reaction to change everything.

Ludwick had a good plan, and he executed it. For the rest of your life, you'll see pitchers get ahead in the count with first-pitch called strikes, and you'll consider those pitches to be positive events, even if they aren't fundamentally different from the pitch Ludwick hit out. Occasionally, the first-pitch strikes will go a long way.

Now move on to the fourth-inning rally from the Reds. The TBS broadcast has an in-game strike zone going, which is good for looking at this. I'll make the GIFs, but I won't put them up. Instead, here are the screenshots of where the pitch ended up on the TBS tracker (the yellow circle is the pitch that was hit), and you can click them to get to the GIFs for each swing. 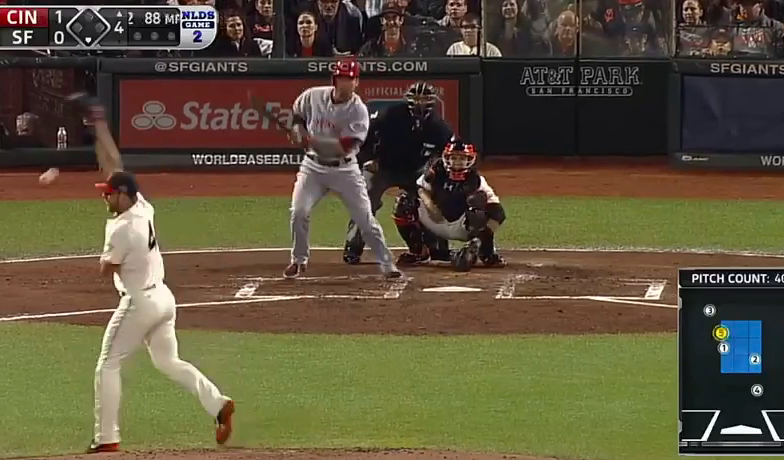 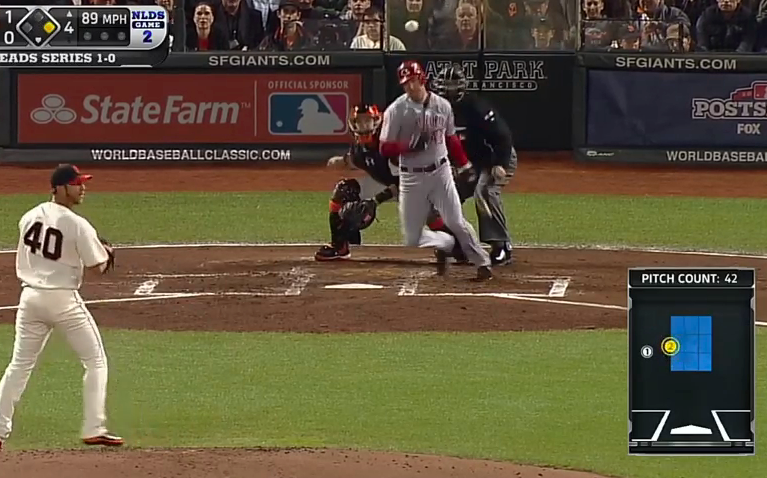 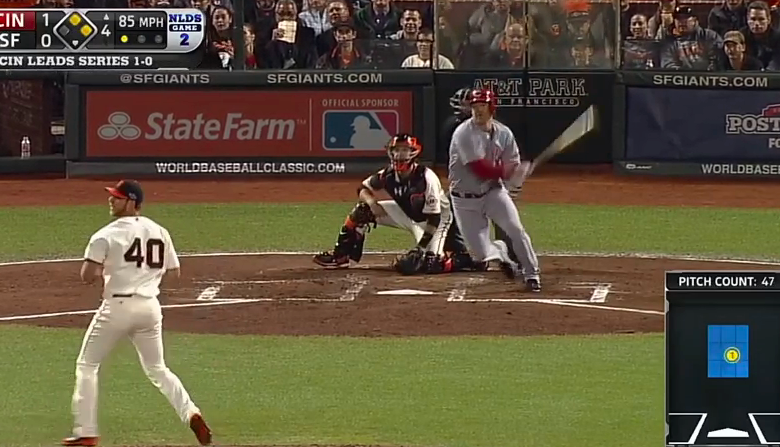 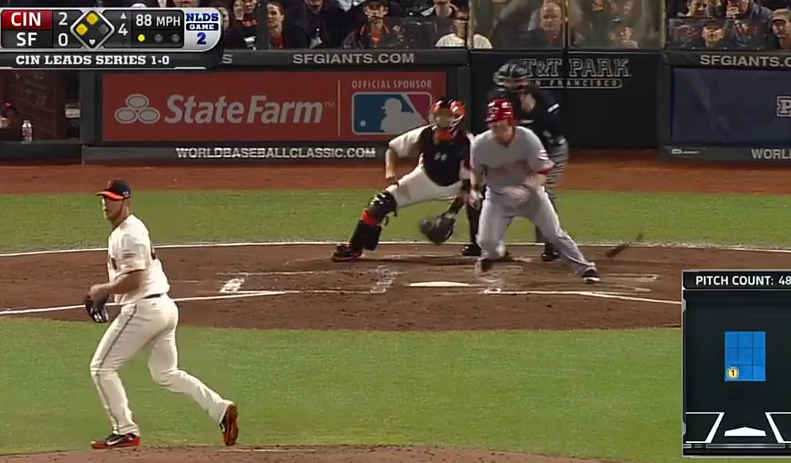 Votto hit a pitch on the inside edge of the strike zone and sent it up the middle. He's Joey Votto. He'll do that. Ludwick hit a pitch that was on the edge of the strike zone, too. Scott Rolen got what was probably the worst pitch of the inning, but all he did with it is weakly fist a ball out to right. Ryan Hanigan hit a ground ball that might have been a sorely needed double play in another game.

Those four at-bats (plus the Ludwick homer) are why Madison Bumgarner left the game early, and why people are wondering what went wrong. What's up with Bumgarner? Is it arm slot or fatigue or followthrough or velocity or mechanics or …? Sure. It could be one or all of those things.

But it doesn't have to be. It doesn't have to be anything. This is baseball. It's the game you follow, the thing you've chosen as your passion for whatever reason. And it's a sport that doesn't always require an examination of what went wrong. The difference between the Giants winning or not winning the World Series is as simple as Jason Heyward not playing six steps to his left before Aubrey Huff's single in the ninth inning of Game 3 against the Braves. You can point to heart, moxie, talent, and derring-do as the reasons the Giants won it all. But if Heyward was a few steps in or over, and if he caught Huff's sinking liner, would that have meant the Giants didn't have any of that? Of course not.

This isn't about luck. It's just a note to point out that if you go around thinking that you need something or someone to blame after every loss, baseball probably isn't the sport for you. There will be times when it's obvious that a player didn't execute well. But there will be more times when it isn't quite as obvious. Was there something wrong with Madison Bumgarner last night? Maybe! Maybe not! Baseball! And I hate it, the horrid sport, even if I keep coming back because it's the best.