What Was and What Should Never Be, Part I

In which we stare a little too long into the abyss made of parallel universes.

Share All sharing options for: What Was and What Should Never Be, Part I

This is the beginning of a little series that might run two installments, or it might go on for the entire offseason. Depends on how much interesting stuff is out there. The goal is to highlight the forks in the road, the points in the playoffs where everything could have changed.

The idea isn't to say "SAY, CHECK OUT THE GIANTS' GOOD FORTUNE, THOSE LUCKY DOGS!" over and over again. Every championship team has these moments. There would have been tipping points if they had lost, too. 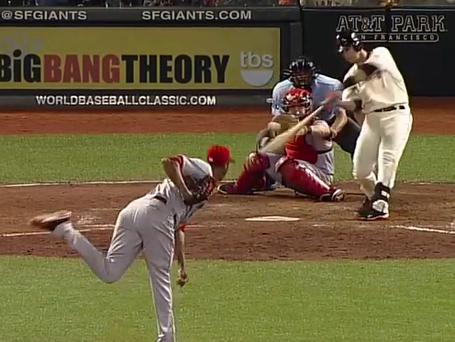 That could have been one of the greatest moments in franchise history, but Posey was a few millimeters off, and he shot the ball back over the screen. So it's not all dumb luck.

Sometimes it is, though. And sometimes it's just dumb. I guess Dusty Baker was trying to stay out of the double play when he sent the runners on a full count with no one out in Game 5 of the NLDS. That's a noble goal. And Hanigan is something of a bat-control monster -- he swung and missed at only 3.7 percent of his pitches this year. Hanigan is also apt to hit the ball on the ground, with a career groundball rate of 49.7 percent.

So it turns out that Dusty wasn't that crazy. There was some method to the madness. And the decision wouldn't have been noticed if there were robot umps: 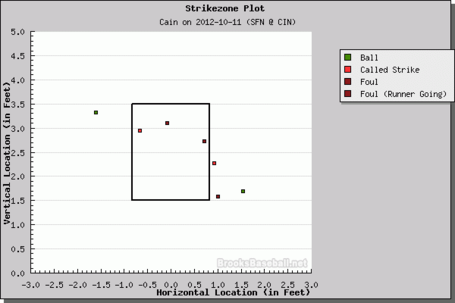 That's from the catcher's perspective, and what you're looking at is the red square just outside the strike zone. That was the called third strike. It was a strike for most of the game, and it wasn't the widest the zone stretched. But it was still outside.

If that call isn't made, the Reds have the bases loaded in Game 5, down 6-3, with a gassed Cain on the mound to face Drew Stubbs. Now, Stubbs can strike out against a computer even when he's playing Halo, but he still has a little power. Things could have been quite different. After Stubbs was a pinch-hitter, and after that would have been Brandon Phillips, who was really, really annoying and terrifying in that series.

(Still not sure how they beat the Reds, to be honest. Guess I'll go back and start watching the games one by one. Spoiler: The Giants win.)