I made a graph!

Back in April, Barry Zito was a thing. His ERA was 1.71, and he'd thrown a shutout at Coors Field. What was the new Zito's secret? Did he find the thing he lost after he found the lost pitch he was finding all along? Was this the new old Zito or the old new Zito? Because we new certainly couldn't expect the old new old Zito, we just new it.

Early in the season, Zito was throwing his slider/cutter (slutter) often -- it was his most-used pitch, with him throwing it 27 percent of the time in April. Did he get away from it and go back to his old repertoire? Some updated numbers:

He's been throwing it more. And here's where it's best to plead ignorance: I'm not sure if the slider is a cutter that's being misclassified by PITCHf/x because of its speed. I'm not good with the lasers and the computers, so I'm just going with the numbers on Brooks Baseball. Whatever it is, he's throwing it more.

Another thing that's different is how much he's throwing his fastball:

Dave Righetti: Zeets, I'm gonna level with you. Your fastball is garbage, and you should throw it less.

Barry Zito: I know. Didn't you get my e-mail back in 2007? I wrote "My fastball is garbage, and I should throw it less." You didn't respond, so I figured it was a sore subject, and I dropped it.

Righetti: Did you send it to "independencenono@gmail.com"?

For all this talk about a different Zito, his ERA this season was 4.15 -- exactly the ERA that got him left off the 2010 postseason roster entirely. And that's a) in a year when offense is down compared to 2010, b) with AT&T playing like an extreme park, and c) with Zito lopping off a strikeout per nine innings somehow. So I'm not trying to prove that the new Zito is on the scene, so chill out, bros, because he's totally got this. Just that he's a pitcher who's trying different things.

And the part about the ERA is a little disingenuous -- that's not a stat that always tells the whole story. His ERA was worse in the second half, but Zito was a much better pitcher:

Small-sample alert, but he had much better control in the second half. His strikeout rate went up, even if the ERA did too. You've probably noticed it without needed a bunch of numbers. He's throwing more strikes, and the wild-hair-up-nose. And maybe, just maybe, this is related to the sharper curveball he's been throwing. I made a graph! 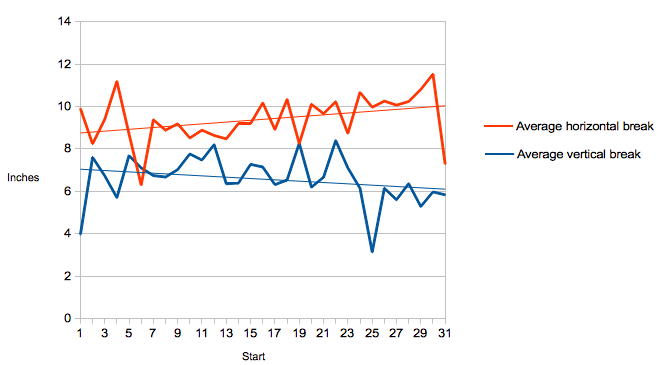 There's less sweep to his curve, and it's been a dramatic shift. With the exception of his last start, for some reason. Which isn't comforting. But Zito always had something of a 12-to-6 curve when he was going right. He's been featuring it more. It doesn't mean anything if Zito hangs the wrong curve at the wrong time to the wrong player, but I made a graph!

I also made this earlier this year:

That's not a real chart, but I think it's my first Thelma & Louise reference, so it's probably more important.

What does this all mean? I don't know. I was sort of just trying to distract you from thinking about Zito pitching today, mostly by writing exclusively about how Zito pitches. It's one of the oldest tricks in the book. But to summarize:

a. He doesn't throw his four-seam fastball nearly as much
2. His strikeout-to-walk ratio jumped in the second half
iii. That happened right around the time his curve started sweeping less and dropping more

Maybe this is a different Zito. Maybe it's not. But here's hoping that, whatever's different, it's enough to keep us sane during Game 4. Here's hoping ...