The Giants win the pennant

Share All sharing options for: The Giants win the pennant

Ever since the new park opened, I thought about a Game 7. I would drift off into a little fantasy world like Calvin just for a second every so often during the baseball season. It was a little weird, a little childish, all fan-boyish, and sort of the reason for being a baseball fan. Maybe it would be Bonds with a walk-off home run. Maybe it would be Matt Morris with a complete-game one-hitter. Maybe Todd Linden in the conservatory with a wrench.

That's a ball hitting a broken bat three times before it made a 45-degree turn away from the shortstop trying to catch it. When it went into the outfield, it went under the center fielder's glove. It was part Langolier, part Macaulay Culkin in Home Alone, sliding under the legs of Joe Pesci as a paint can falls on Pesci's head. It was terrifying, it was hilarious, and it was the damnedest thing you ever saw. It cleared the bases.

For a team to make the World Series, they have to be good. It's not like the 2008 Giants were going to get an at-large selection for the tournament, show up, and ride Fred Lewis to an 11-game sweep of the postseason. The regular season is a long, long winnowing process. All of the teams involved in the playoffs are good.

Barry Zito pitched a brilliant game against a team that devoured left-handed pitching. Remember the whispers from a "source close to the team" that the organization was fed up and planning to buy out his contract? In order for the Giants to make the World Series, Zito had to stick around and be otherworldly. Nonsense.

Brandon Crawford had to time a last-second leap against a Kyle Lohse liner floating over his head; the Cardinals had to field like they were using their glove hand to fish a set of keys out of their back pocket and say is that a baseball coming this way?; Chris Carpenter had to make a miraculous recovery from a serious injury and not have his best stuff; the Giants had to pitch through their two best pitchers leaving their best stuff in August; they were down 2-0 in the first round of the playoffs, and 3-1 in the second round.

Nonsense. It's all nonsense. And it's beautiful nonsense. Ryan Vogelsong is going to pitch in a World Series. Zito will likely start Game 1. Buster Posey and Hunter Pence didn't hit a lick, but it didn't matter. To get to the World Series, a team needs to have things go their way. They have to be good, too. It has to be the perfect amalgam of talent and nonsense.

Vogelsong, Zito, and Cain each had an RBI over the last three games. The Cardinals scored a run. Nonsense.

It's not all nonsense. Sometimes it's poetry. Matt Holliday twisted his handlebar mustache after sliding into Marco Scutaro, everyone got riled up, and it was Scutaro who caught a Holliday pop-up in the rain for the last out of the series. That's like a Quentin Tarantino plot if he were into baseball and really, really boring. But when it happened in real life, it was sublime. 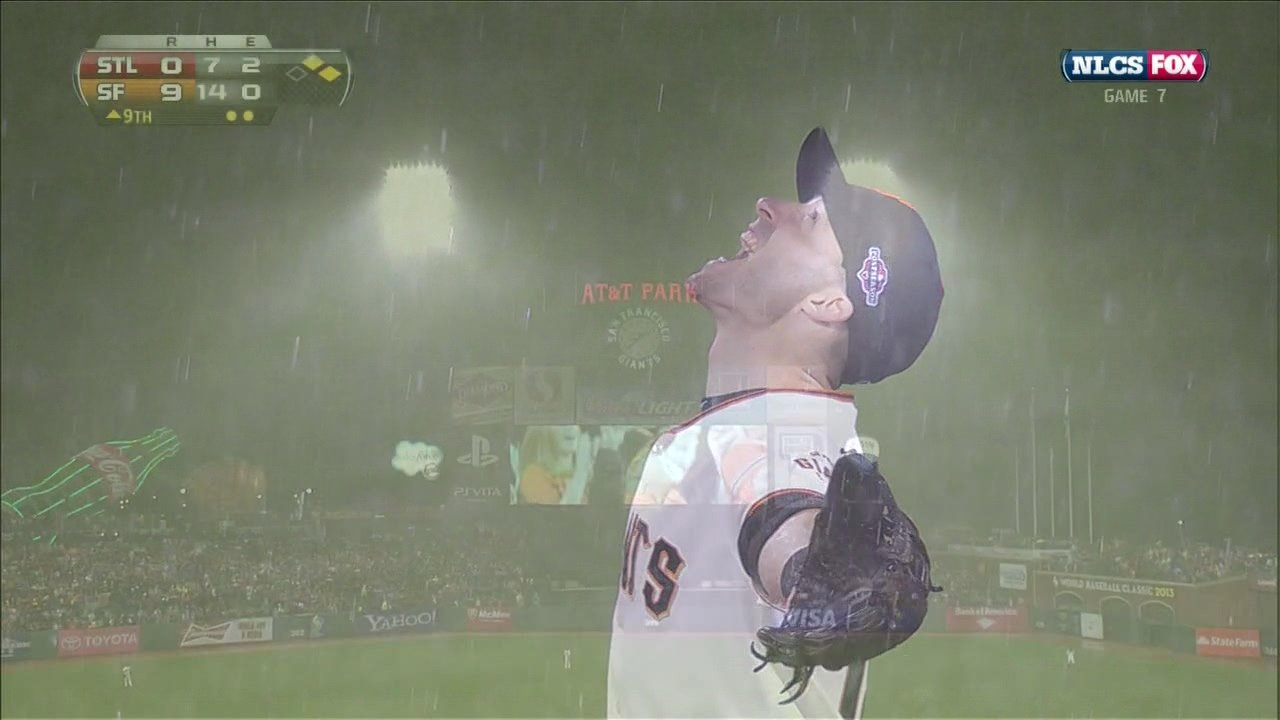 Marco Scutaro, who crawled through a September with the 2011 Red Sox and came out clean on the other side. Marco Scutaro.

We can worry about Justin Verlander tomorrow, and there will be some worrying. But tonight is for sitting back and wondering what in the heck just happened. I have no idea. The Giants just won the National League pennant for the second time in three years.