The Giants were about to waste a bases-loaded chance in the fourth inning, but surprising postseason hero Brandon Crawford came through again.

I wrote 1,000 words about Game 5 on Friday night, but I didn't mention Brandon Crawford's RBI single once. That was a mistake, as it was the most important at-bat of the night, and it deserves some credit. It deserves a ton of credit.

With two outs, the Cardinals could have escaped the inning allowing just one run. Brandon Belt popped out weakly to second in the previous at-bat, blowing a runner-on-third/one-out chance. If the Giants were going to score again, they were going to need a hit. Crawford had one of his best at-bats of the year.

So here's a pitch-by-pitch look at Crawford's at-bat against Lance Lynn. It ended up with a two-run single, setting the table for Ichiro Zito to bunt in the fourth run of the inning. Without that cushion, it's likely Zito would not have pitched the same way he did, and everything would have turned out a lot differently.

I've done this before, and it happened to be a Lance Lynn match-up then, too. My muse! 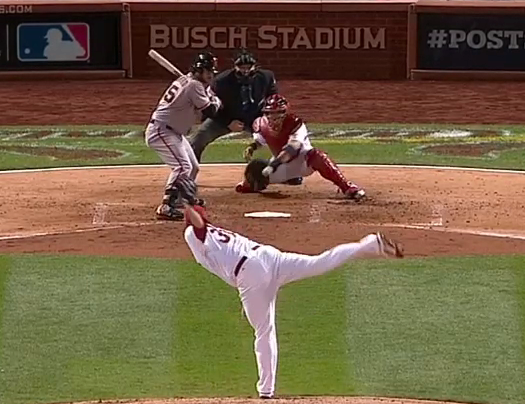 Molina caught the ball just off the ground, so it was never in doubt of being called a strike, but this still shows just how close the curve was to the strike zone. There's a screenshot of the GameDay zone at the bottom of this article, and this first pitch just missed. Crawford saw two curves in his previous at-bat, swinging over the first and fouling the second away. If he were sitting on a first-pitch breaking ball, he probably would have pounded this into the ground.

It would have been a perfectly located pitch with two strikes, but I think Lynn was trying to get ahead in the count. 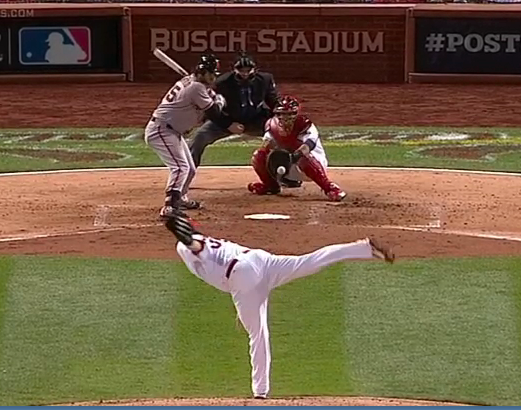 A beautiful 1-0 pitch that was called a strike. Unless Crawford was thinking opposite-field the whole time, there wouldn't have been anything he could do with this pitch. 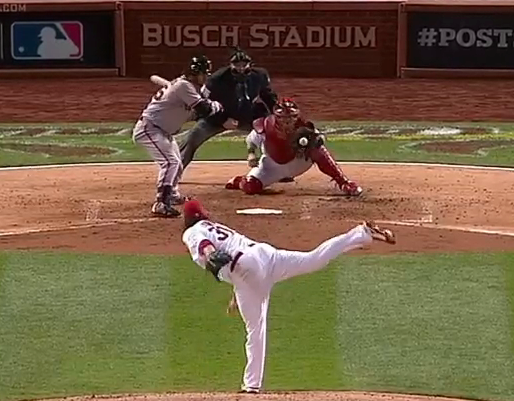 Lynn's changeups are hard -- maybe too hard, as there isn't a great separation between the change and his fastball -- and they have movement that tails away from a left-hander. He doesn't throw a lot of changeups; according to FanGraphs and PITCHf/x, he threw a changeup just over six percent of the time. Crawford couldn't have been expecting it, and he were looking for a fastball, he could have flailed at this pitch. 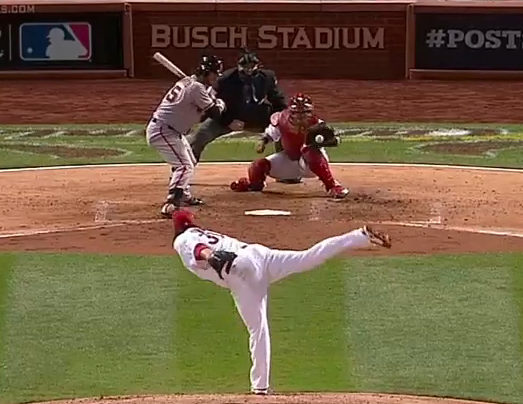 Lynn backs up his changeup with another one in the same spot. Again, these are tailing out of the zone, so at some point, they must have looked pretty tempting to Crawford, especially if he's thinking fastball with a 2-1 count. 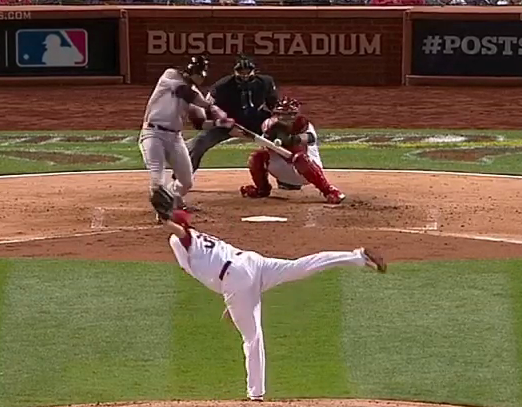 This was a 3-1 count, and Crawford was sitting fastball. I love stills like this because you can see the difference between a foul out of play, a pop up, and a double into the gap is a matter of millimeters. Crawford timed his swing well, but his barrel of the bat was about a quarter-inch too low.

Of course, if he gets the barrel of the bat on it, maybe it goes straight to Allen Craig at first. It never ceases to amaze me how every baseball game, and the outcome of every season, hinges on things like this. GAME OF INCHES, EVERYBODY. IT'S A GAME OF INCHES.

Between Pitch #5 and Pitch #6 (Intermission) 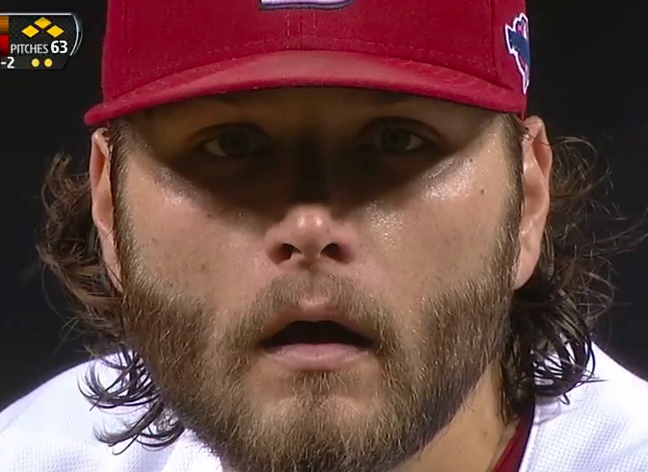 Do you challenge the superiority of my flowing locks? 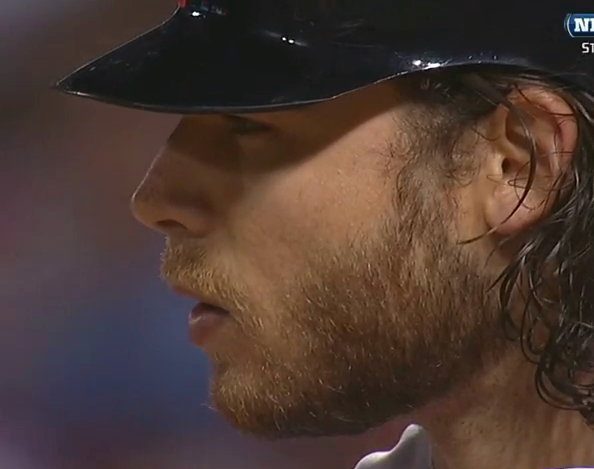 Do you challenge the supremacy of my well-manicured facial hair?

Then we must battle.

It is our way. 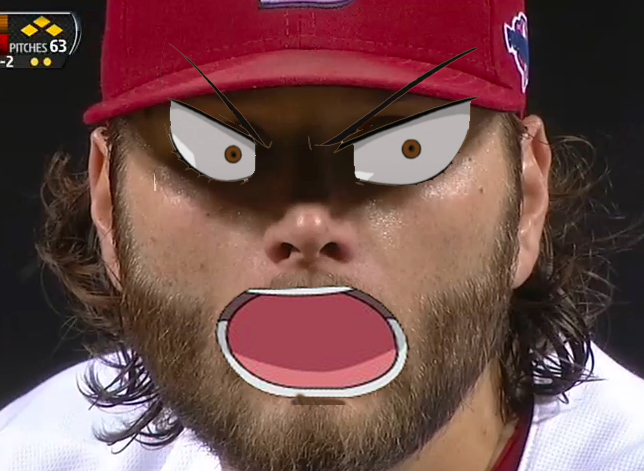 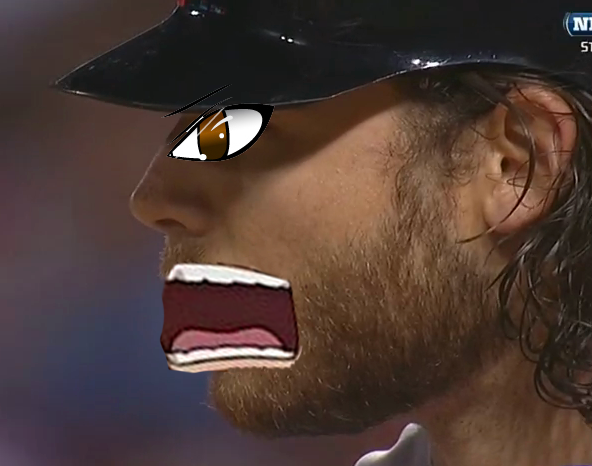 Pitch #6 (80-m.p.h. curveball)
This is the payoff pitch, and it deserves the triptych treatment. 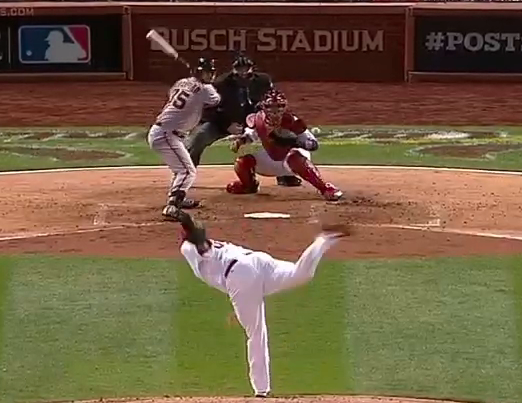 I'd guess this is about where Crawford said, ruh roh, curve ball. 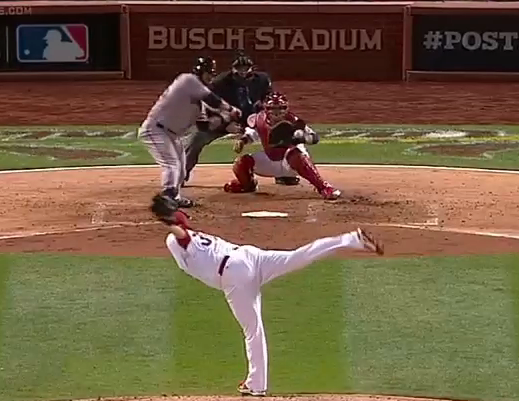 He's made his decision to swing, hoping it doesn't bottom out of the zone. 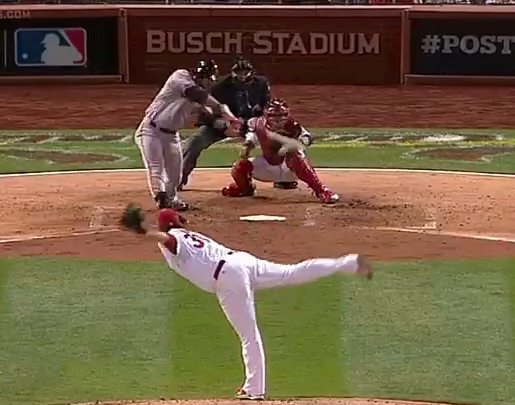 He didn't square it up. The 3-1 swing was probably a better one. But this swing was timed well, sending the ball right up the middle.

The at-bat as GameDay saw it:

Before the season, I was desperate for Crawford to be competent. He was. At-bats like this give me hope that he can improve even more one of these days. It might not be especially likely, but it's possible. He's still young enough.

And that's the story of a heckuva at-bat that helped keep the Giants alive in the playoffs.