Barry Zito, you magnificent creature, what have you done?

It's hard to imagine a better game in that situation. A 1-0 nerve-wracker behind Matt Cain would have sucked the juices out of you like a spider. A 5-0 win behind Vogelsong would have made you worry about how the rotation set up for the rest of the series. You know, because it would mean an impending Zito start, and those things are spooky. A 12-0 blowout would have been fun, but that creepy little voice in your head would have whispered "The Giants should be saaaaving these runs for Sunday," even if that's not how the world really works.

No, it was perfect because it was Zito. The expression "house money" is overused, but for a good reason. There's probably a German word for "Screw it. Let's just unplug it and plug it back in because sometimes that works and… whoa, dang, I can't believe that worked", but until someone clues us in on what that word is, we'll stick with house money. If Zito had a poor outing, you would have flown through the stages of grief, mostly because you were par-cooking the first couple stages in your brain for the last 24 hours.

You could hope for a decent outing, of course. That wouldn't be outlandish. A decent outing is what Zito does every now and again. And occasionally, every so often, when the moon is right, Zito has one of those decent outings where none of his walks come around to score, and where the breaking balls are hit right to the middle infielders with runners on base. That was the best-case scenario.

But that wasn't the Zito who showed up. The Zito who showed up was the one the Giants thought they were getting in the first place, the one who could command his big curve. One of the big myths about Zito is that his fastball disappeared when he joined the Giants, as if the airlines lost the suitcase with all the miles per hour between OAK and SFO. He averaged 85.8 in his last year with the A's; he's averaged 85.4 with the Giants. It's lower now, of course, but that's something of a new phenomenon.

The curve is the thing. When he convinces the other team he can do this at will …

… his fastball plays up. Matt Holliday swung through a fastball in the middle of the zone after slightly nicking a two-strike curve because he was worried about the curve. In what might have been the most important at-bat of the game, Daniel Descalso waved through a high fastball with no one out and runners on second and third, mostly because he was sure he was going to see that curve.

I haven't smoked in well over a decade, but … dang. Maybe I'll just go the Dave Attell route and have some Skittles.

You're probably going to read more than a few comparisons between this and what Alex Smith did to the Saints last year. And that's not wildly unfair. But I've always maintained that Smith's problems had a lot to do with external forces -- a porous offensive line that got him murdered, dunderhead coaches, and a shoulder injury that was more serious than people gave him credit for. Football isn't close to an individual sport.

With Zito, it was him against the world. It's different for a pitcher. Maybe the fielders change behind him, but it's mostly a struggle between one player and his eroding skills, or an eternal battle between a pitcher and his complicated mechanics. The analogy breaks down.

But the larger reason behind the easy comparison stands. Zito's a guy who's taken so much crap from San Francisco fans -- here included, of course -- over the last six years, and he's finally, finally, finally the toast of the town here. If you can't feel good for him right now, regardless of what you think he'll do if he gets to pitch again this postseason, you can't feel good about anything. 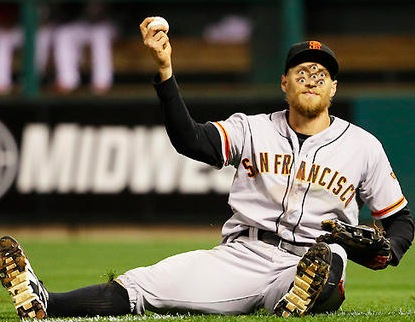 Now you really can't feel good about anything.

There's a chance -- somewhere between insignificant and significant -- that you'll look back at this play ...

... and pretend that's when you knew something special was going to happen. Because that was perfect. It was an impeccable marriage of idea, execution, and timing.

The double by David Freese in the second almost threw me over the edge. It's probably not fair to say it was a catch that every right fielder would make, but it was certainly a catch you want your right fielder to make, especially when his glove is in the general vicinity of the ball. It was defense that was just poor enough to lose. It put a runner on third with no one out, and what are the odds that Zito could get out of that without allowing a run? Rest in peace, 2012 Giants. I couldn't have been the only one feeling the doom.

After that, the defense was remarkable. Marco Scutaro, who usually has a little more Keppinger in him than we like to admit, made some great plays. Angel Pagan made a splendid dive on a ball that I didn't give him a chance to catch. Brandon Crawford didn't do anything flashy, but he handled everything hit at him. And even Pence made up for anything he might have done wrong with his sorta-bare-hand catch.

That was the best team defense of the playoffs. I don't think it would have been the same if whoever was on the mound couldn't throw strikes, so I don't think it's quite right to say Zito wholly benefitted from it. It was something of a symbiotic relationship, and it was fun to watch.

If you're looking for tickets to the game, don't forget about the folks at TiqIQ. Starting at $150 right now!