On Brandon Belt Not Starting Again

Share All sharing options for: On Brandon Belt Not Starting Again

Was Belt the answer? Would the Giants be in first if he had started all year? Nah. Probably not. But it's hard to imagine a way the Giants could have dickered him around any more, especially considering this is just his second season in professional ball. After giving him the starting job, they gave up on that idea after 50 at-bats. In Albert Pujols's first 50 at-bats this season, he hit .226/.288/.358. That isn't to say that Belt is the next Pujols, but it's a reminder that 50 at-bats isn't the kind of sample that can tell you a whole lot about a player's ability. Even good players struggle.

There's more than the numbers to the story, of course. There's the eyeball test. When Belt was struggling, he didn't look good. When he was succeeding in the minors, well, Bruce Bochy didn't see those games. The ones that Bochy watched featured a struggling Brandon Belt. You don't need 500 at-bats to know when a guy is good or not. You can just tell. So Belt didn't get the chance to adjust, didn't get the chance to patch the holes in his swing.

When the pressure got to be too much, and when the Giants offense was going through what might have been their worst offensive stretch in franchise history, Belt was put back into the starting lineup. It was August 14th, and Belt started 14 games during the remainder of August. He hit .220/.291/.440 during that stretch. Sure the .731 OPS was better than what Aubrey Huff had done all year, but Belt's line came with a bunch of strikeouts. So that experiment ended, and Belt stopped starting.

Now Brett Pill is up. He's starting today against a right-hander, mostly because he hit a home run last night against a left-hander. That makes sense. This is a pretty good sign that Belt has been officially buried. If Pill has a two-hit game today, I'm guessing we won't see a whole lot of Belt for the rest of the season.

So here's how the Giants have made their decisions regarding Belt:

Your argument might be that, well, he looked awful during those stretches. That's sort of the point when it comes to stats, though. It's rare that when a player struggles, he does so gracefully, hitting line drives that just happen to get caught. Usually players who aren't doing well look like players who can't play baseball well. And when a hitter is hot, he looks like the reincarnation of a young Roberto Clemente. Stats help you sort through that.

The Giants, though, believe that they can sift though the tea leaves and figure out who is swinging a hot bat, and who isn't. They don't need to be wary of small samples because they can just tell. It's this kind of faith-based strategy that has the Giants constantly failing to score runs.

Brandon Belt's superlative stats in the minors suggest that he's a special hitter. His performance in the majors suggests that he has work to do. The Giants are doing everything in their power to make sure that he gets that work in the most erratic way possible. They've started him, benched him, demoted him, promoted him, and refused to start him against left-handed pitchers even though he's been fantastic against them this year.

Well, that last note is probably just the mirage of a small sample. But, hey! Why has that ever mattered? 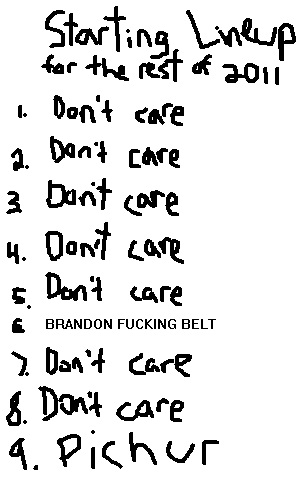 Learn it. Love it. Live it. Let's see what Belt looks like without the threat of getting pantsed by small-sample goblins. Give him the job, and then back the hell away for the last month of this miserable season.

Comment starter: If Buster Posey has this streak before this streak, the Giants don't win the World Series. That's more of a statement than a comment starter, but I really believe that. If Posey strugged when he first came up, the season would have been far, far different, even though his talent level wouldn't have changed at all.