Share All sharing options for: Post-game thread: You don't care.

This was the game that helped you think that next year could be a steaming cauldron of garbage too. What happens to the bullpen if the late-inning relievers -- two of whom have already been on the DL in the past two months -- go down to an injury? Well, something like tonight, just more often. That fifth-starter spot? It was hard to be less impressed with Surkamp tonight, but luckily the Giants gave us a snifter filled with Zito to help us remember that the alternatives are just as unpalatable.

And, hey, the Giants scored two runs. How about that.

There's only one positive from tonight: the Giants were officially eliminated from postseason consideration. Even the extra-cynical folks were at least glancing at the Cardinals and Braves scores. Because, heck, if the Braves lost five in a row and the Giants filed an injunction, and if the Court of Appeals granted the runs waiver based on the Trillo vs. Lurie decision from 1985, and the Cardinals were eliminated because of some sort of fake-passport scam, the Giants totally had a shot. Everything just had to go perfectly.

Nope. Book is closed. It isn't 2010 anymore. It's perfectly okay to dig out those World Series DVDs and get loaded on nostalgia. Maybe we should have viewing parties in the offseason -- open GameThreads for each game of the World Series. We can sync up our DVDs. That'd be fun, and only 3% pathetic. Maybe 40% pathetic. Aw, heck, who cares?

And after that we can sync up 2011 games to Matchbox 20 albums just because this season needs to be more annoying. Also it totally syncs up. When Rob Thomas sings "I want to push you around" while listening to Yourself or Someone Like You on repeat 20 times before getting to the 11th inning of the Posey game, Scott Cousins is leaving third base. No, seriously, try it.

Pretty sure you don't want to read a lengthy recap. Heck, I didn't watch the game. I was in a car, listening to it ... for a few minutes before realizing that you can get a satellite radio station that's all Matchbox 20, so we just flipped that baby on, cranked it up, and rolled up the power windows on our fingers over and over again. I regret nothing.

Wheee! You know what else has something to do with baseball? This picture. 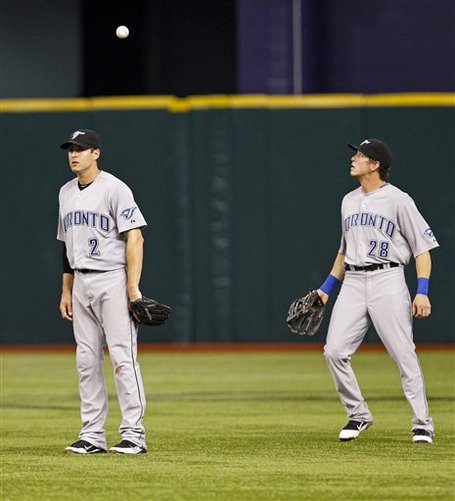 And I think I'm through with baseball for a while. I'll watch tomorrow, but only because I'm a moron.