At the beginning of September, before a three-game series at home, the chatter was that the Giants needed to sweep the Diamondbacks to jump right back in the race. They lost two of three. In retrospect, a sweep would have been pretty keen.

Now here we are again, needing a sweep. This time, though, it's to avoid watching the Diamondbacks jumping around on the field, dog-piling in front of the Giants. It's likely to happen, of course. It's hard to sweep a bad team, much less a first-place team. So the odds are good that there will be a big ol' celebration on the mound at some point, possibly with the camera zooming in on the dark, soulless voids that used to be Matt Williams's eyes. Kirk Gibson will do that stupid startin'-a-chainsaw motion he did after he hit the homer off Eck. And Aaron Hill will kiss Luann DeGroot right in the middle of the field like they were in Fever Pitch. It's going to suck.

The alternative is that the Giants could sweep and get a little eeeeensie bit of hope back. They're good at that. And then we'll all have to a) hope the Giants can sweep the Rockies while b) rooting for the Dodgers at the same time. That sounds like a horrible way to spend a weekend.

There's still the Wild Card, of course. Yep. Totally still have a shot. Four back, six to play. Sounds like a gas.

As you can tell, I don't know how to approach this series preview with anything other than Gumby shoulders. It's going to suck, unless it doesn't, which means we'll get our hopes up again, which means it will just suck later on. I was much more excited to write about Matt Kemp's Triple Crown chances today than I am to write this series preview, that's how little I'm looking forward to this series.

It's still baseball, I suppose. A month from now, we'll miss Giants games. Two months from now, we'll twitch in our sleep and try to teach our cockatoos to whistle "Take Me Out to the Ballgame." In three months, we'll be like the protagonist of Midnight Express at the end of his incarceration -- a babbling mass of scant humanity, completely unintelligible and useless to the rest of society. In four months, we'll refresh MLB Trade Rumors every five seconds, hoping for an update on a minor-league deal to at least one Jeff D'Amico. In five months, Pablo Sandoval will come into camp in the best shape of his life.

Throughout that whole ordeal, we will be willing to pay hundreds of dollars to watch a single meaningless Giants/Diamondbacks game. So can we really just take it for granted right now?

Yes. Yes, we can. You stink, baseball. Take all your stupid mix tapes back. Here's your sweater. I hope you figure out whatever it makes you hate the world, baseball.

/checks Facebook to see if baseball poked me back 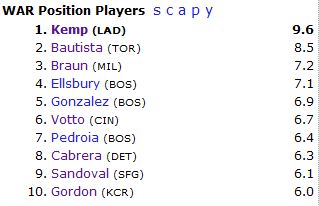 And that's with missing a month. What a season he's had with the bat and glove. He'll be the hitter to watch next series too, if only because this is the second season out of the last three where he's been the only player worth watching in a wretched lineup. Without him, this season would have been completely abysmal.

Pitcher to watch:
Tim Lincecum could finish 13-14 with an ERA well under 3.00. Let's all watch him not do that, please?