Did you read that the tentative 2012 schedule was released? Yep. Without looking, let's see if we can guess it.

The sixth series against the Padres is here! Can you feel the excitement in the air? No, seriously, reach out and feel it. Give that excitement a good caressing. Because in December, you'll wish you had Padres/Giants series to complain about. You'll be reading some Bleacher Report slideshow about 25 free-agent targets whose name rhymes with Mince Yielder, your brain will go sproing, and you'll curl into a fetal position and day dream about Steve Edlefsen pitching to Kyle Blanks. No, it's true! You forget what it's like in the offseason! It's like Jayson Stark's motto: Winter is coming.

But for now, it's perfectly acceptable to make fun of another Giants/Padres series. It's amazing how easy it is to ignore the Padres when they aren't the team directly in front of you in the standings.

Ten things I know about the Padres

1. They got Cameron Maybin for a couple of relievers, which is unbelievably annoying, but only the 195th most annoying thing the Marlins have ever done.

2. Kyle Blanks is the largest human being on the planet, but he's nice because Everth Cabrea sits on his shoulder and acts as his conscience.

3. They used to have Mike Adams, and now they don't. Unless they received Mike Adams in exchange for Mike Adams, I approve of this trade.

4. Ha ha, just kidding. Do you really want to know what the Padres got for Mike Adams? Do you really? You probably don't. They got a pitcher with insanely low walk rates who will shut the Giants out 74 times in Petco Park over his career.

5. Just kidding again. They actually got two of those guys. You can just picture the Giants hacking at the first pitch already. New left fielder Raul Ibanez will make the last out of the first no-hitter in Padres history.

6. They have a Venable on their team, and I refuse to learn and remember if it's Max or Will.

7. Mat Latos is clearly a jackass, and I love that he's on a rival team. There wouldn't be a Karate Kid if Daniel had to spar against a bunch of kids from his AYSO team. There has to be a Cobra Kai. And if you think I've used this analogy once too often, well, now I have photographic support. 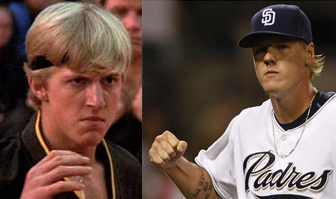 8. Heath Bell seems like a nice, funny guy. I hope he signs with the Mets or something.

9. Ernesto Frieri screws up the whitest Baseball Reference page in history, even accounting for the teams that were around before segregation 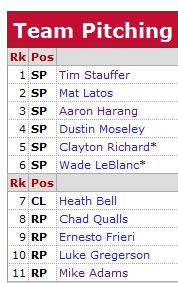 Maybe Harang's a little too Eastern European or Turkish or centaur or something to completely maintain the illusion, but Frieri is the obvious outlier. It's amazing.

10. I lied when I indicated that I knew ten things about the Padres.

There it is. After five full series against the Padres, that is literally everything I know about them. Literally! And here they are again.

Hitter to watch
James Darnell isn't the best prospect in the world, but he was tearing up the Texas League this year. He's the kind of player who will have enough value for a team to get a Orlando Cabrera-type player for a couple of months.

Pitcher to watch
Cory Luebke kept showing up on all of these K/BB rookie lists when I was writing about Brandon Beachy last week. His strikeout rate has jumped pretty dramatically in the majors, which is really annoying. I'd like to think that's because the rest of the league isn't familiar with him, but I'm skeptical that he'll regress in the next three games.