When the Giants left Philadelphia, things were looking up.

Carlos Beltran: Do not fear. This is but a minor setback.

Beltran: Climb on my back, my new friends.

Sabean: He smells of persimmons rather than some grotesque half-eagle, half-lion!

Beltran: I will save you.

The Giants left with a series victory against the Phillies on the road, up four games in the NL West. They had Carlos Beltran, who was a legitimate middle-of-the-order hitter. Everything was looking up. Then the Giants never won another game. The losing streak has been so bad, I even had a dream that they broke the losing streak on a win from Ryan Vogelsong, who was a prospect for the Giants ten years ago.

The Phillies haven't lost since then. They've won six straight, and they finally have a full-strength team. Everyone's back, including Roy Oswalt and excluding Joe Blanton, which makes this the toughest the Phillies have looked all season.

Man, it was awesome when they had Joe Blanton.

The thing that scares me the most about the Phillies is something best described with the Aaron Rowand Axiom, which states:

The Phillies do not have Aaron Rowand hitting lead-off for them tonight. The Giants do.

So while it's cute that there's a vocal minority of Giants fans who like to think that the Giants are "in the Phillies' head!!!!" or some such, this is almost certainly the National League team I want to see the least. And for four games? Cripes.

The good news is that Tim Lincecum, Matt Cain, and Madison Bumgarner are still on the Giants, and they have a way of making the other teams look like they're starting Aaron Rowand, Aubrey Huff, Eli Whiteside, and Orlando Cabrera. That's why I'll never freak out over another team's offense too much. They're always like us, even if only temporarily. And the Phillies have a mighty fine rotation, but at the risk of being one of those weenies who quotes himself, allow me to be one those weenies who quotes himself:

Every pitcher is Roy Halladay to the Giants. You know what kind of pitchers do well against the Giants? The ones with noses.

Still holds true, so there's no reason to rewrite it. And that came from a post before the NLCS, when we were told that the Phillies would completely shut down the Giants' offense. Of course they were: they were using pitchers. Those guys kill the Giants. And they probably will again. But not hitting has worked so well over the past year, it's just crazy enough to work again!

So the Phillies scare the bejeepers out of me, but so does baseball. I probably could have picked a better hobby or interest.

Hitter to watch:
Hunter Pence will eventually give some sign that he's an insect in some sort of humanoid suit. Whether it's wings jutting out of his jersey, or a face covered in pollen or feces ... something's going to give him away. 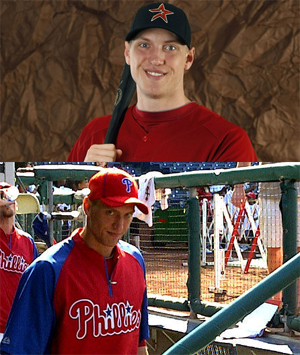 Cripes. It's not that he's unusual looking, it's that he looks a little askew and then plays like he does. He runs weird. He swings weird. He throws weird. He's exactly what you would expect an alien or insect to be like if they were trying to blend in. Close to imperceptible ... but not a complete success.

Pitcher to watch
Roy Oswalt has already made two starts against a minor-league lineup. After his third one on Sunday, he'll probably rejoin the Phillies' rotation.

Prediction
No matter what the outcome, people will make waaaaaaaaaaaaaaaay too much of this series. Unless it's a split. Then that will just be annoying.