There are only 27 games left in the season. There's a chance for this team to be really, really special.

The 1968 Giants scored 599 runs. It wasn't a bad team -- they finished second in the National League -- but it was 1968. That's the year that pitching dominated baseball so much, they changed the rules. They lowered the mound because no one could score.

I used to be fascinated with the 1968 team pages. I wondered what it would be like to follow baseball that season. Bob Gibson led the world with a 1.12 ERA. Steve Carlton was also on the Cardinals that year, and his 2.99 ERA was good only for a 97 ERA+. A 2.99 ERA wasn't even a league-average performance in Busch Stadium that year. No one could score that year. No one.

Gee, I wonder if you see where I'm going with this.

The Giants are on pace to score 545 runs this season. Let's hop into the wayback machine and see when the last time the Giants scored that few runs.

Well, sheesh, that wasn't that long ago. What's everyone complaining ab ... oh, right, the strike. There were only 115 games that year. Before that, then.

That's not that long ago. So it won't be so histor ... oh, right, the other strike. There were only 111 games that year.

Swell. Most of those teams were dead-ball teams. The 1918 Giants, for example, hit 13 home runs as a team that season. Also, they played with one baseball all season, and it was made from a sheep's bladder stuffed with shredded newspaper. Different times. Teams also played 124 games per year back then, and the '18 Giants averaged 3.87 runs per game. The Giants have averaged 3.36 this season. It's unfair to the dead-ball era teams from the early 1900s to compare them to the 2011 Giants.

This is the worst offense the city will ever see.

Whoa! That was Randy Wells's stat line before this game? THAT'S TOTALLY CRAZY THAT HE SHUT DOWN THE GIANTS, THEN. WHAT ARE THE ODDS?????

A month ago my house smelled like cat urine. I was pretty sure this was because one of my cats had sprayed urine all over my house. So I got on my knees and sniffed the carpet all around my house. Couldn't find the source, but I could still smell the urine. It was strong. I took off my shirt, but that wasn't the problem. Frustrated, I took off my Giants hat to scratch my head. The Giants hat was soaked with urine. It was then that I realized that Orlando Cabrera had peed on my hat while I was sleeping. He's probably still in here somewhere. I bet if I set the place on fire, he'll come running out, and then I'll know for sure. It was probably him.

Nope. That sure as shit doesn't make me feel better. But if you want it, there's the schedule for the Niners this season. I'm thinking that game in Philly is going to be a real crapstorm. The best part will be that it's during the NLDS, so we can watch the Phillies in the playoffs at the same time.

The Diamondbacks have a fake sausage race during their games. One of these things runs around the field: 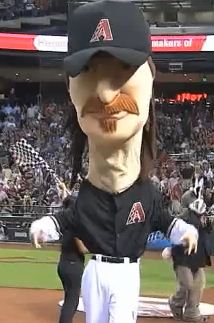