A heckling memory: this game in 2000. I was never much of a heckler, but I was young, drunk, and stupid back then, whereas now I'm not young. The Giants were about to clinch the division against the Arizona Diamondbacks, who had won the division the year before. Before the bottom of the eighth inning started, the Giants were up 8-6. The opening notes of "Welcome to the Jungle" started as Luis Gonzalez was throwing his outfield warm-ups. I shrieked, "Welcome to the jungle, Luis! You're going to suck!"

No, it wasn't funny. And then about ten minutes later, I was enthusiastically singing along to "Who Let the Dogs Out?", cementing a 30-minute stretch of embarrassing behavior that I look back on with pangs of regret. But the Diamondbacks bugged me back then. They won the division in 1999 after Jay Bell and Luis Gonzalez went from good to otherworldly, and Randy Johnson decided to postpone aging. And it seemed like they were all cocky about it.

In 2000, the Giants were 8.5 games back on June 1st. The Diamondbacks were 35-19, and skipping to their second straight NL West title. The Giants went 72-39 from then on to win the division by eleven games. Part of my unamusing heckle was pent-up frustration. The Diamondbacks were supposed to win the division again, and they had a nice lead in the early summer. They probably thought they had the division locked up. Well, ha! Ha!, I said.

So, yeah. That's how the Diamondbacks and their fans are feeling right now. They're listening to talking heads and Giants fans yabber about the deadline arms race between the Phillies, Braves, and Giants, and they're more than a little annoyed with the whole operation. The Diamondbacks two games back. Two games back! The Giants were two games back last year on September 8th. There is far too much time left in this season. Isn't there some sort of labor issue that the union needs to deal with right away?

I know that doesn't apply to a lot of the people here, of course. This is a place filled with baseball-god-fearing folk. We'd never be so arrogant. Well, not about that, at least. But I'm more than a little sick of other goofballs looking past the Diamondbacks. I also want to punch Baseball Prospectus's Postseason Odds Calculator right in the digital junk. Quiet, all of you! There's a division to win!

Part of me is confident that the Giants are the better team, especially with Carlos Beltran. Another part of me stares at the even run differential and wonders how in the hell the Giants are in first place.  This series is either going to reinforce the former or the latter, though if the Diamondbacks sweep, I won't be wondering about the latter anymore. Heck, if the Diamondbacks run through Cain, Lincecum, and Vogelsong in San Francisco, the Giants should just break up and join other teams. We'll use Mays Field for monster-truck rallies and Pearl Jam concerts or some crap.

Here we go! Big series time. Yay. Last year, the Giants seemed to win every one of these ... in September. Last August, the Giants were still farting around, losing all sorts of games in unspeakable ways. Let's not do that again, fellas.

Hitter to watch
Paul Goldschmidt is a career .317/.407/.626 hitter in the minors, and the Diamondbacks skipped him over AAA for this series. He's struck out and homered as you were reading this, probably in the same at-bat. If you were annoyed with Mark Reynolds, you're going to dislike watching Goldschmidt just as much. He'll probably look awful in several at-bats in this series before launching a 2,000-foot moon shot into Hayward. The trick is for that moonshot not to mean anything. Get on it, Giants' pitchers.

Also, this assumes that the Diamondbacks play their young first baseman, which is illegal under current baseball rules, so it would be pretty risky.

Pitcher to watch
I don't have a better place for this, so ... 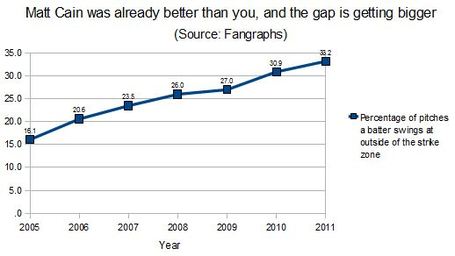 I love Matt Cain. I don't know why he isn't returning my letters.

For the Diamondbacks, the pitcher to watch is Jason Marquis, who owns the Giants. I hate phrases like that. He's pitched well in 11 starts against several different Giants teams, some of which actually featured Eugenio Velez. It's not predictive of anything.

Prediction
Jason Marquis shuts down the Giants. He totally owns them. Hopefully, Ryan Vogelsong can match him inning-for-inning, and the Giants can win on a walk-off sac fly in the 15th.