The first Phillies series since the NLCS. This is frightening because the Phillies are an excellent team. This is pleasing because it brings back memories of the Giants winning the National League Championship Series*.

But this isn't a series for nostalgia. This isn't a series to revel in past achievements. The Giants are a contending team, and they have unfinished business this year. To make too much of last year would seem touristy.

So the real question is this: is there a rivalry between the Giants and Phillies?

Whoops. Sorry. Yeah, I guess I found that picture in February and thought it would make a good .gif to haunt Phillies fans. This is because I'm a poor sport and probably a bad person.

But that's enough. There's no sense living in the past. Just because the Giants won the NLCS last year on the best, most perfectest pitch I've ever seen in my life ...

... doesn't mean that we need to bring it up every ... single ...time ... the Giants play the Phillies. There are other story lines, people. Here's one: what would that .gif of Wilson striking out Howard look like in slow motion?

Dang it, I'm just doing what I said I wouldn't do. So tacky. So satisfying.

But the original question is a good one, I suppose. Is there a Phillies/Giants rivalry now? Sometimes the best rivalries are the ones that aren't necessarily set by tradition or geography. The Giants and Cardinals had a pretty sweet rivalry in the '80s, and to switch sports, 49ers/Cowboys and 49ers/Packers were great rivalries. Those weren't around in the '70s, but when the Giants and Niners were championship contenders in the '80s and '90s, the rivalries found them.

My first reaction to the Phillies/Giants question: no. Give it a few years. One NLCS does not a rivalry make. The Rockies and Diamondbacks fans seem to hate the Giants more than each other, and they faced each other in the NLCS just four seasons ago. Even though both the Giants and Phillies are leading their divisions right now, it's still somewhat unlikely that they'll both reach the NLCS again -- not because they aren't good enough, but because weird things can happen between no and the middle of October.

But I can come around to the idea for a couple of reasons:

All of those feelings are heightened compared to, oh, a series against the Reds or Mets. Not even close. This series has haunted me (in the best possible way) for a while. Maybe after the stories change for the 2011 playoffs, it won't feel like a rivalry. But right now, yeah. Of course it is.

Carlos Beltran. He's totally going to do one of these: 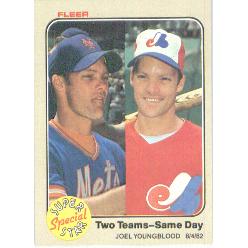 ... for both the Phillies and Giants. This will be possible because the Giants will accidentally DFA Beltran

I'd rather not face Halladay or Lee, don't get me wrong. But I'm also not about to get cocky.

Oh, man, there's gonna be hella trash talk on Twitter. Hash tags blowin' up and all. Looking forward to at least six "your stupid"s in baseball debates around the internet. Sometimes I wish I could just give humanity a big ol' sloppy kiss, I love it so.