Oh, good. Another series against the Padres. Here's what that makes me think of: 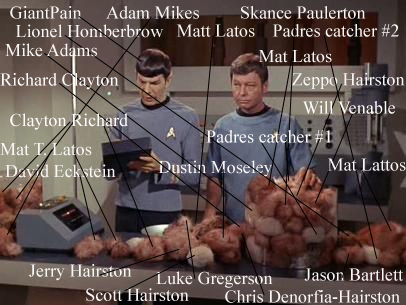 On July 14th last year, the Giants were in fourth place. The Padres were in first.  In the head-to-head match-ups before the All-Star break last season, the Giants were 1-7 against the Padres, even though they had both scored the same amount of runs in the season series to that point (12). San Diego was a surprise contender, sure, but they also looked like they were going to annoy the NL West for years. What happened?

Well, they're still annoying the NL West. So annoying. So, so annoying. And good for them. But the better question would be, why are they in last place? Some theories:

1. Adrian Gonzalez was good, and now he's on a different team.
Is good. Was good. Was really, really, really good. Still is. Maybe one of a dozen hitters in baseball who could put up normal-looking stats in Petco. Now Anthony Rizzo is a nice young player, and Casey Kelly is still young enough to transcend his mediocre stats in AA, but watching the Home Run Derby, was there a Giants fan in the world who was thinking, "Boy, it was sure upsetting that the Padres recharged with a bunch of prospects in that Adrian Gonzalez trade?'

Nope. Every fan of every non-Padre team in the NL West was giddy that they could watch Adrian Gonzalez without openly weeping. He's an amazing talent, and I love that I can appreciate him now. While I understand why the Padres couldn't commit $150 million to him, if there were ever one guy to commit 30% of a payroll to, it would be the only guy in the world who wasn't that fazed by Petco.

2. No, seriously, that's the only reason.
It's not sabermetrically sound to think that. Last season, FanGraphs had Gonzalez at 5+ wins over replacement. So in theory, if they replaced him with the worst first baseman in baseball last year -- Jorge Cantu, you irony-loving bastard! -- they still would have finished with around 85 wins. In theory.

But the correlation of the Padres' decline and the loss of Adrian Gonzalez turns me into a bad scientist. I refuse to think that two are not wholly linked. I refuse to look at stats for the rest of the team because I might find another reason for the Padres in last place, and I will only accept arguments that reinforce my already-established position. America!

I've heard people argue against WAR because of things like "How can Pujols be worth only seven wins? If he isn't on the Cardinals, they would lose 90 games!"  But then you break it down. The difference between a .340 OBP and a .440 OBP is ten fewer outs per every 100 plate appearances, but you don't get secret runs just for getting on base, someone has to drive you in. And it's not like every game is decided by a run or two, so you have to take that into account. And so on and so on, blah blah blah, but when you isolate everything that a player does well over a 162-game season, and replace it with the efforts of a worse-yet-still-professional player, you can see how the difference is always less than ten wins*.

Adrian Gonzalez brings out the faith healer in me. The alchemist. He makes me feel like there's something ... exponential about having one great hitter in the middle of a bad lineup, like he's the only support beam under a rickety beach house. That's the only way I can explain it, and it's almost certainly nonsense.

Maybe when Anthony Rizzo turns into a great hitter, I'll feel differently. But when I watch the Padres beat the Giants in that special Padres way, I still think, "Well, at least they don't have Adrian Gonzalez." And when the Giants do beat them, as with the last two games, I think,"I'll bet they would have won that game if they still had Adrian Gonzalez."

Hitter to watch
Not Adrian Gonzalez. And not David Eckstein while I'm at it. So annoying. Chris Denorfia is getting to those levels, but he's not there just yet.

Pitcher to watch
The one who keeps getting Aubrey Huff to roll over a grounder to second base. What manner of sorcery is that???

Prediction
Two teams. One run. Every night. It's like the two girls/one cup thing,but harder to watch.