The Luxury Of The Not-My-Money Theory

Share All sharing options for: The Luxury Of The Not-My-Money Theory

A spectrum of caring: 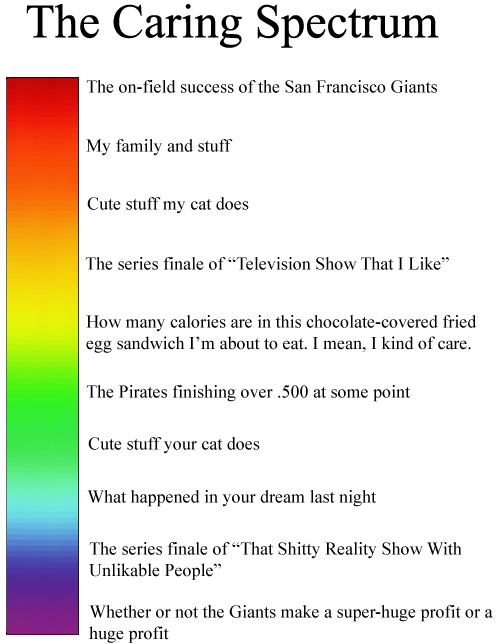 Notice that thing at the bottom. As someone who has paid $8 per beer for the 200 games I've been to since I turned 21, I don't care. I've spent more in beer at AT&T Park than I did on my first car. Then you add in tickets, parking, train fare, shirts, jackets, and seven Panda hats (for each day of the week), and I probably could have retired by now if I had just taken up a less expensive hobby, like skiing, or gemology. So I don't care if the Giants make a huge profit as opposed to a super-huge profit.

That's obviously an immature position to take. Business is business, and the San Francisco Baseball Associates LP are certainly a business. There's a smart way to run a team, balancing investment and expenditure in just the right way, and the Giants seem to be doing a good job. They aren't cheap, but they aren't throwing money at players who could handcuff them when it's time to dole out long-term contracts to their young, homegrown stars.

In the short-term, though, I absolutely could not care less. When I hear that the Mets will trade Carlos Beltran on a sliding scale -- eating his $8M means you give up Ehire Adrianza, say, while eating only $2M means giving up Zack Wheeler -- I can't imagine a scenario in which Beltran isn't a Giant already with the Giants paying the whole salary.  That could be a totally exaggerated and unrealistic description of how the Mets are looking at a potential Beltran trade, but let's assume that it isn't for a second. Moar good players, please. Figure the rest out later.

This isn't a Beltran post, though. This is just a general if-it-takes-money-to-get-a-good-player-I-don't-care post. I understand why the Giants can't sign Mark Teixeira. I don't understand why they would balk at an expiring contract. It's not a mature, measured reaction, but I don't think I'm alone. The Giants are kind of Scrooge McDucking it right now, diving into a huge vault filled with gold doubloons and ingots. The Niners stink, the Warriors stink, and the Sharks are hockey. The Giants own the region. They even own a piece of the second-most profitable baseball team in the Bay Area, the San Jose Giants. They can afford a pricey, short-term midseason upgrade.

At least, I hope so. Remember the Parable of Casey Blake, in which we learned that a) Casey Blake is an awful person, and b) the Dodgers were willing to give up Carlos Santana if they didn't have to pay for the full Casey Blake. Terrible decision, especially since a large-market team like the Dodgers shouldn't need to pinch penn ... oh, right. Still, that was an ill-advised decision. I'm hoping the Giants don't do something similar. Because I care about the Giants keeping their prospects. I don't care about how much money they make in 2011.