I never would have thought that there could be so much complaining after a World Series win. Not in a million years. It makes me really, really proud of my fellow Giants fans. They are who we thought they were. If you want to crown their ... oh, wait. The crown's right there.

I wondered how a bunch of chronic complainers -- and, yeah, that's the tag I'm labeling the entire fan base with, including myself, but only because my decades-forged wall of anecdotia says so -- could complain after a season in which everything fell into place. The answer is with more complaining. So familiar and welcoming. It's like we never left.

The Giants have had things to complain about, of course. The breaking of Buster Posey. The disintegration of Freddy Sanchez. Losing Pablo Sandoval right as he was in the middle of an April hot streak. Losing Brandon Belt after he was called up the second time, right as he probably would have started taking at-bats from Aubrey Huff.

Not every team has had worse injury luck, but there are teams that are worse off. Quite a few. The A's have had a far worse time. Doesn't mean we should stop complaining. I ordered some Rosetta Stone software so I could learn to speak complainese, and I'm not throwing that money away just because the Giants are in first.

So here are the first-half awards for the best worst team in the history of anything that I've ever watched:

Top-ten biggest surprises of the 2011 first half:

It was a tight race towards the end, but Vogelsong pulled it out.

Biggest non-Vogelsong related surprise (good-news division):
Nate Schierholtz was always a glove and an arm, but now he's hitting. His latest hot streak has put him third on the Giants in FanGraphs' WAR and Baseball Reference's WAR, even though UZR's small-sample chicanery doesn't like his defense this year. If Schierholtz could hit, even just a little bit ... oh, man. League-average or better starter for peanuts. It's not greedy to hope for that.

Jeremy Affeldt reclaiming his value is high on the list too, as is Ramon Ramirez's stellar year.

Biggest non-Vogelsong related surprise (bad-news division)
When Brian Wilson struck out Ryan Howard to win the 2010 NLCS, it was on the greatest pitch I've ever seen. Hyperbole? Nope. Not considering the situation. It was a 3-2 count. A walk would have put the winning run in scoring position. A pitch that was too fat, though, wasn't an option against Howard because an extra-base hit would have led to a loss as well. 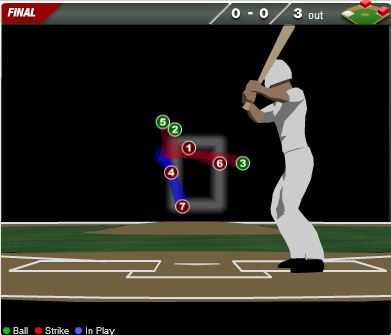 Perfect, perfect pitch. After that pitch, I was convinced that Wilson had pinpoint command. I wasn't sure when it had happened, but Wilson was the world's hardest-throwing nibbler. When he walked guys, it was because he was too fine. But his command was impeccable.

Or so I thought. Right now, I don't trust him to throw strikes. With a two-run lead, I'm scared he's going to walk the leadoff hitter. That's quite the surprise. I thought whatever sadler-related thetans that were clinging on to him were exorcised.

Best game of the year
So, so many walk-offs and brilliant pitching performances to sift through. You can see how this season has been painful. There's Darren Ford's vroooming against the A's, the walk-off wins in the opening home series against the Cardinals, taking it to Felipe Paulino twice, which led to the Rockies releasing him, which led to him being good again for a different team ... so many options. And there are about ten that I didn't mention that I'll get chewed out for omitting. I could put them here, but that would take the fun out of it. I'm not just forgetting a bunch. Nope.

But given the a) opponent, b) the setting, and c) the situation, I'll go with the Nate catch against the Dodgers. It's worth revisiting. The runner-up would probably be the out-Padreing the Padres last week.

Worst game of the year
Not even worth a link. It was an extra-innings game. The Giants lost to a team from the NL East. Maybe the worst I've ever felt after a loss, Game Six included.

My second least-favorite game of the year was the final game in Oakland. The A's out-Giantsed us, which is worse than being Padred.

Irrational prediction for the second half
Brandon Belt actually takes over as the starter at first. I know, I know.

Rational prediction for the second half
Bill Hall does not hit cleanup at any point.

So now you. Again, those categories for easy copying and pasting are:

Here's hoping the second half is as miserable as the first.