Post-game thread: Had it all the way

Share All sharing options for: Post-game thread: Had it all the way

1. There was no way to express the appropriate mixture of despair, boredom, and annoyance. Ubaldo Jimenez looked like a pitcher who could be beaten tonight. He didn’t look awful; he just looked like a pitcher that a team with any idea how to hit could get to. That team was not the Giants.

2. One of my ideas for a post-game thread in the event of a boring loss was going to be a piece of fiction. It was going to be the story of how Buster Posey lost his hitting skills in a poker match to a riverboat gambler named Clem Faborne. Clem had an eye patch, but he was mostly trustworthy. It was to be a tragic tale, and the moral of the story was that they Giants were going to develop a hitter next decade. False alarm with that whole Rookie of the Year thing! I don’t believe that Buster Posey is in anything but a normal slump, of course, but the story would have been cathartic. Dude hasn’t looked good for a week or two.

3. I love Mike Fontenot. I love the idea that someone who is my size can play baseball for a living. But on Willie Mays’s birthday, there’s something deeply perverted about him hitting third in the order. As the lineup would turn over, and Fontenot’s name crept closer, every time I thought, really? That’s the hitter we’re looking forward to? And he was. He earned it. It feels like the kind of thing that would upset a volcano god, and it scares me at the same time it warms me.

4. Sometimes I think about the 800+ plate appearances that Nate Schierholtz has had as a Giant -- like, really think about them -- and I try to remember the times that he did anything that indicated a sliver of hitting talent. I remember an inside-the-park home run, vaguely, and he did launch one into the seventeenth deck of Coors Field last month. But those seem like cloudy memories -- like if I tried to research those specific Schierholtz-related positive outcomes, I’d run into some crazy "Jacob’s Ladder"/"Inception" labyrinth of my own subconscious. When he was up in the eighth, I could taste the grounder to the right side. I was wrong, and I like when that happens.

5. This game is a loss if Pat Burrell doesn’t take a pitch to the opposite field in a situation when yanking it down the line for a home run would have come with more style points. Feels like there aren’t going to be a lot of opportunities to type that sentence. He didn’t try to pull Betancourt. That was the smart move. It might have been the at-bat of the year.

6. While Schierholtz was batting, I was doodling this: 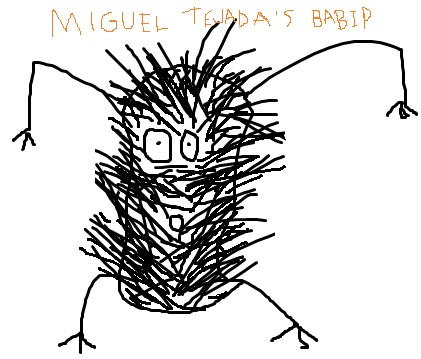 Don’t try to give it any meaning -- it’s just nonsense. It wasn't meant to express any sort of opinion on Tejada. But it comforted me. The Giants were about to lose a game in which Miguel Tejada had three solid, well-executed, quality at-bats. That little guy had something to do with it. Still not sure if he’s benign or not, but he’s 1-0 now.

7. Matt Cain didn’t deserve to lose. He rarely does. He’s a very good pitcher who is still under .500 for his career. A no-decision is a blessing when you think about it, even if he deserved more.

8. There was a symmetry between the hit that Jonathan Herrera poked up the middle in the third and the one that Freddy Sanchez had in the ninth. The Herrera hit annoyed me -- a little chopper with a catcher leading a double-hit-and-run that just poked through. But it’s not like I felt bad when Sanchez’s doink navigated its way through. Those two hits were the most baseball hits of the night.