Buster Posey isn't off to a great start this year.

Yes, it's only been 137 plate appearances.  And...yes, we're not even a quarter of the way into the season.  But it's still not fun to watch.  Dude's been struggling, and it ain't pretty.  I don't like it when my favorite young superstar doesn't obliterate pitchers right from the start.  It makes me kind of uneasy.  But I'm trying to find an explanation for what's been going on, and I'm trying to find some positives, so here goes:

Per Baseball Info Solutions (BIS), Buster's batted ball tendencies before this season (460 plate appearances) have him spraying the ball to all fields pretty evenly, pulling the ball to left 34% of the time, 37% to center and 29% to right.  Since I don't have access to more detailed information, I don't know how many of those balls in play to center are towards left or right-center.  Some hit location data from MLB Gameday (courtesy of Katron) may give us some insight: 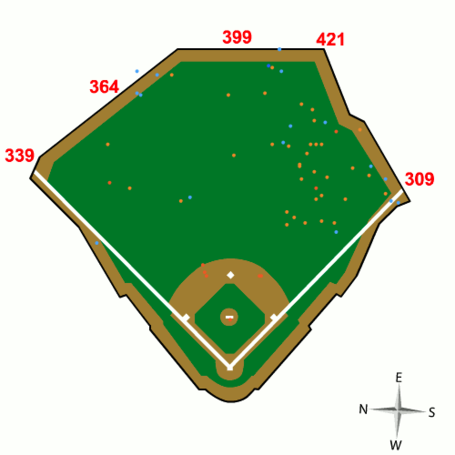 Granted, these are only Buster's plate appearances from AT&T Park, but it becomes pretty clear from his spray chart-stringer bias or not-that the majority of line outs, fly outs, doubles and triples are towards the opposite field.  I'm sure you're asking "why is this important?"  Well, I'll show you:

BIS has Buster becoming slightly more pull oriented, shifting his batted ball distribution a bit from going to the opposite field to his pull side.  But, here's the thing: while Buster may be pulling the ball more, he's not making as hard of contact.  BIS coded line drives suggest that Buster is lining the ball to left about 11% of the time, as compared to his 2009-2010 total of 18%.  There are a multitude of issues with determining what a "line drive" is or isn't, but the difference-7%-is noticeable enough to warrant a mention.  Especially when we take a look at how he's faring on balls hit to the right side of the field:

There has been a marked increase in ground balls-rather than lifting or driving the ball to right or right-center, Buster's been driving the ball into the ground 25% more than he was before.  By decreasing the number of balls he hits in the air, Buster reduces his chances of hitting extra bases, which is reflected in his Isolated Slugging-which currently stands at a pedestrian .118, not even close to the .200 mark he posted in 2010.

We all know Buster's true talent level is far better than his current .244/.336/.361 line.  Of the projection systems out there, I feel like Dan Szymborski's ZiPS estimated Buster's true talent the best-as a .297/.366/.479 hitter.  It's a darn good forecast-not what Buster's capable of, mind you, but a reasonable estimate of what we should expect from him.  In order for Buster to reach this projection, he would have to hit .311 for the remainder of the season (forecasted 567 AB) and post an ISO of .199 to match his ZiPS projection.  And if he were to try and match his ROY numbers in terms of average and power, he would have to hit .321 with an ISO of .222 (think Pat Burrell, Paul Konerko, etc.).  Given his abilities, I wouldn't say it's out of the question-but it's not particularly likely, either.  Posey's rest of season ZiPS has him finishing the season with a .280/.357/.443 line, which is good-but not great, and definitely not what we believe his true talent level to be.  I suppose the question is whether or not he'll begin driving the ball to the opposite field like he was before.  I'd like to think so, and I'm optimistic that he'll fix whatever it is that's preventing him from replicating his 2010 success.  And that he'll outperform his updated ZiPS.

So, that's a positive.  Buster can definitely match his projection; he'd just have to hit about the same as he did last year.  There's another positive I'd like to mention as well, something that I'm hoping Buster can spread amongst his teammates as well.

Buster is seeing more pitches per plate appearance this year (4.09) as compared to his career 3.86.  This means that, so far, he has seen about 32 more pitches than he would have in the same number of plate appearances last year.  Over a full season-600 PA-that amounts to approximately 138 extra pitches seen.

This shows up in his walk rate-Buster is currently walking in 10.2% of his plate appearances, which is 3.7% higher than his career rate.  Given that pitches per plate appearance stabilize for hitters somewhere around 150 PA, and walk rates at 200 PA, I'm fairly confident that Buster is finally beginning to show the patience that he was lauded for by scouts and showed while in the Minor Leagues (13.1 BB%).  He's been less aggressive-rather than swinging at the first pitch 27% of the time, he's only doing it 17% of the time.  And, per BIS, Buster has laid off more pitches outside (6%) and inside the zone (6.3%) as well.

Buster isn't off to the greatest start, and the longer he struggles with driving the ball to right field- unless he finds a way to compensate- he'll continue to struggle.  Buster's too good for this- let's just hope he returns to form soon.  The Giants have scored the second fewest runs in the Majors, and we need our star backstop to really kick in to gear.