You’re probably a logical sort of person. When you're almost out of gas, you drive slower to the gas station, not faster. When someone forwards you an e-mail about nectarines with poison centipedes lurking inside, you check Snopes.com. And when your team is cleaning up in spring training, you harrumph and note that it’s only spring training. Good for you.

But if I can play Lasorda’s advocate for a second, there is a visual argument against the truism that spring training records don’t mean anything. Witness: 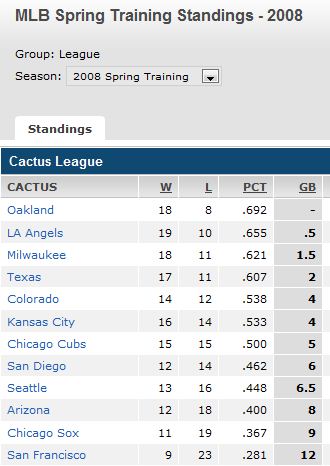 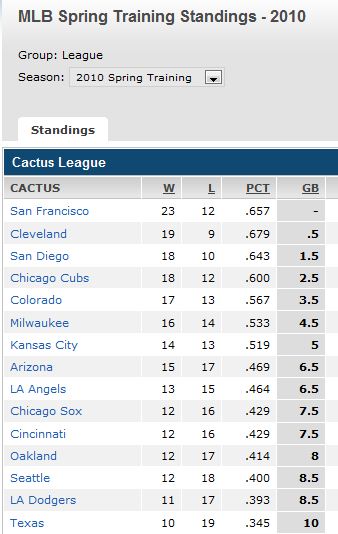 In 2010, the Giants were Cactus League champions. They went on to win the World Series1.

Just ignore all of the noisy data that don’t fit the general point, such as the Indians having a great preseason, or the eventual AL champs looking like a cricket team that got on the wrong plane. This is about the Giants only. And it’s pretty clear that within the huge sample of a couple of cherry-picked springs, the Giants’ spring training record is completely predictive of how the regular season would go.

But wait, there’s more! Here’s a breakdown of the past eight springs, which is as far back as ESPN goes:

The asterisks are for the Bonds years, which corrupted the sample. The Giants’ clubhouse followed the Kübler-Ross model of grief once the team saw Bonds arrive in the clubhouse in February or March:

Science. Irrefutable, testable science. This post is all about the scientific method. I didn’t set out to write a tongue-in-cheek post suggesting that spring success equals regular season success only because the Giants are absolutely rolling in this year’s Cactus League. No, no. I’m only interested in science. But now that you mention it...

The Giants are absolutely rolling in this year’s Cactus League. And, no, that doesn’t really mean anything. After a magical and surprising postseason run, though, doesn’t it feel good that they never stopped winning? I’m a jaded, bitter, and cynical man, but when I look at 17-5 record, it’s hard not to smirk. Again, it means nothing. There’s a pretty good chance that Gary Brown isn’t going to cap off a ninth-inning comeback against the Dodgers in the regular season this year, so there’s no reason why that spring win should translate to something predictive for the regular season.

But this all leads to a theory I’ve been developing for a while. It’s kind of a revelation, so once it’s out there, the site might not be the same. There’s no putting the toothpaste back in the tube. Here goes. My theory:

I’ve enjoyed this spring quite a bit, and I don’t really care if it’s meaningless.