Share All sharing options for: Predicting the American League

Think these things are frivolous guessing games, do you? You're just bitter because you're not one of the hundred-thousandaires that I create every year. Like, oh, last year: 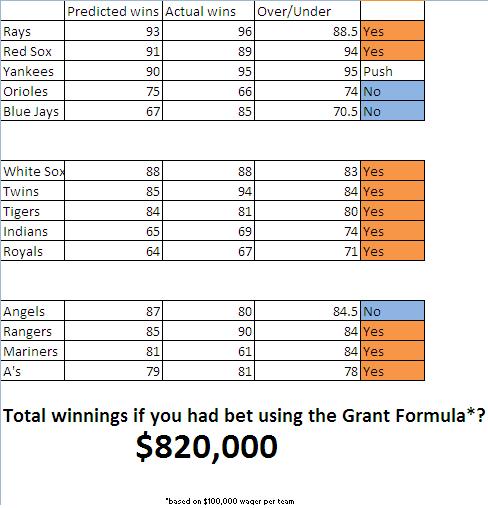 (Based on these over/unders and odds.)

Yeah. Now what's up? You can keep your day job if you want, but the real people are going to pay $199.99 for my picks this year and retire in October. You can send the fee via PayPal to mccoveychronicles@gmail.com.

Screw it. Here you go. AND DON'T RESEARCH MY PICKS IN PREVIOUS SEASONS. I'm sure they were all correct as well. You can just give me money later.

A better Orioles team will bring down the aggregate win total for the division. It's still the best division in baseball. And there's been a backlash against the idea that the Yankees rotation is going to be terrible -- certainly, any rotation that starts with C.C. Sabathia and Phil Hughes can't be a truly bad one. But the drop in A.J. Burnett's K/9 was alarming, and behind him is a hodge-podge of crud-pudge. Ivan Nova's shiny ERA and low K/9 in AAA has a real Jerome Williams feel to it, and I don't care what kind of spring Bartolo Colon or Freddy Garcia is having. They might get away with it because of their offense, but I'm getting out my 2005 Rangers stamp for the 2011 Yankees, just in case.

Of course, they'll trade for Dan Haren and Francisco Liriano midseason and blow this projection out of the water.

The Red Sox are probably the best team in baseball. It's silly that a single team can add Adrian Gonzalez and Carl Crawford in the same offseason, and Josh Beckett should be better. Not sure what to make of John Lackey, and Dice-K is Zito with about $20M in total savings, but the rotation is definitely underrated in some circles.

The interesting thing about the Blue Jays is

And the Orioles actually have a pretty nice lineup -- no obvious holes from 1-9 -- but young pitching is young pitching. If Brian Matusz and Chris Tillman break out this season, the Orioles have a 10% chance of being the 1997 Giants. That's without Bonds, of course, but they also won't have Jose Vizcaino, so it evens out.

A healthy Justin Morneau is a pretty big deal, and I really like their lineup overall. Not bad for a team that can't compete and was in danger of contraction. I can't pick the White Sox because of the Juan Pierre Theorum, which postulates:

The Tigers could get some Huff-like bounce-back years from Jhonny Peralta and Carlos Guillen, but there are a lot of weird spots in the lineup and rotation. I have no idea, for example, what to predict for Rick Porcello or Austin Jackson. Could be great, could be awful, and a lot of the Tigers' success this season could be dependent on young players like that.

And while there's no good reason to pick the Royals ahead of the Indians, pity makes for a fine deciding factor. Soon the Royals will rise from the ashes. Soon. Not yet.

Even without Cliff Lee, the Rangers still have a good rotation, and while Adrian Beltre's contract is going to be a rowandian mess at some point, he's still a very good player. They were an excellent team last year, but they just ran into a juggernaut of biblical proportions that everyone knew couldn't be stopped from the moment the first pitch of the season was thrown. And Edgar Renteria.

I love, love, love what the A's did this offseason, bringing in good-not-great hitters like Josh Willingham, Hideki Matsui, and David DeJesus without raiding the farm, but I'll temper my optimism for now. They could easily win the division.

If Vernon Wells regresses for the 41st time, and if Torii Hunter starts showing a little age, the Angels' offense could be spectacularly wretched. However, I'm still ticked off that they got Dan Haren for Joe Saunders and some (admittedly interesting) low-A arms. There wasn't another team that could top that? Haren is really, really good.