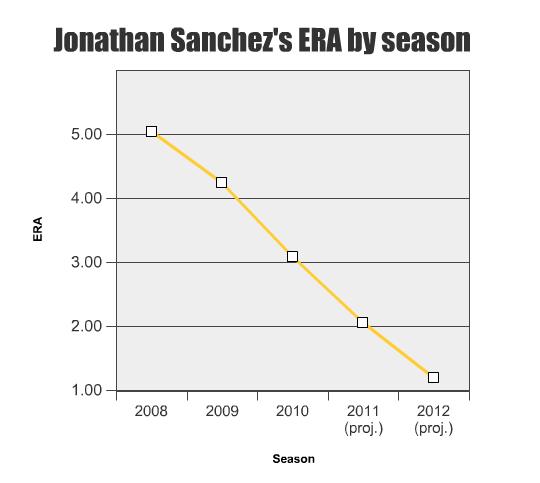 Okay, so Jonathan Sanchez got lucky last year. There are still doubters among you when it comes to BABIP, I’m sure. There’s nothing wrong with being suspicious about the new orthodoxy. The idea is that once a hitter makes contact with a baseball, the pitcher doesn’t have a lot of control over what happens next. It doesn’t matter if the pitcher is a Hall-of-Famer or a fringe player. It seems counterintuitive. Shouldn’t the pitchers with really, really good stuff be harder to "square up?"

Those were just the first two names I thought of when I thought of "good stuff" and "not as good stuff." And, hey, look at that, they had an almost identical BABIP over their respective careers. So while it might be tempting to say that Sanchez’s stuff is good enough to make him an outlier, that’s ridiculously unlikely. Pedro Martinez’s stuff wasn’t that good, and no one in the history of anything had better stuff.

There’s another extreme, too. If you look at how lucky Sanchez was – start here for the raw data – there’s a tendency to think he’s going to give back every single gain he made in preventing runs last year. That might be right. I’m not smart enough to know. But I do know this:

So sweet. So likely.

According to Fangraphs, though, Sanchez is almost exactly the same pitcher now that he was in 2008. Same strikeout rate, same walk rate, close to the same home run rate. It’s really likely that he just pitched behind a better defense and got a few more breaks, which is what led to the reduced ERA. I understand that when I look at the numbers, but what about my spidey sense anecdotal impressions, which tell me that Sanchez really was a better pitcher last year?

I think it’s this:

He was really a bullpen-chewing monster in 2009. Of those nine starts of six innings or more, he pitched exactly six innings four times. He made it out of the seventh inning once, and that was when he pitched his no-hitter. Last year, Sanchez was allowing fewer runs, sure, but he was also going deeper into games. Probably because he was allowing fewer runs, now that I think about it.

Man, I don’t know what to think about Sanchez. Forget I even asked. I’m splitting the difference between the optimistic and the statocalyptic because I’m afraid to commit either way.