Matt Cain is a good pitcher. ‘Nuff said. His ERA has been consistently good, and he doesn’t allow a lot of hits, which is what a pitcher is supposed to do. I don’t see what the big deal is. When hitters get on base, Cain bears down like an animal. Specifically, the bear. He has a warrior mentality every time he goes on the mound. He’s amazing

If there is one thing he could stand to improve on, though, it’s his win total. He’s slowly figuring out how to win -- consider that he’s had two straight winning seasons -- but he’s still under .500 for his career. Here’s a chart of the pitchers since 1900 who have had an ERA+ over 120 with a losing record over more than 100 starts:

These pitchers were unable to win on a consistent basis. They weren’t historical outliers -- they just lacked a killer instinct and a winner’s mentality. Hopefully, Cain is learning both of those as he goes. After the jump, I’ll spend 10,000 words on what I think it takes to be a true winner in this league.

All of the sabremetricians and stat-educated folks gone? Good. I really didn’t want to stand in the middle of WWI-style trench warfare as treatises and articles flew over my head. I just wanted to talk about Matt Cain, king of awesome, so I had to write that up there.

Look at that list. Almost no one in the history of the game has been hosed quite like Matt Cain, but here’s the most amazing stat of all:

Not provided by Baseball-Reference.com: View Play Index Tool Not Used Not Generated 2/11/2011.

At no point did he return to the locker room, corner Dan Ortmeier, and say something like...

Hey, Orty, that was a pretty sweet 3-1 pitch you swung at. Yep. A slider two feet off the plate. That’s one to rake, alright. I can’t believe you made contact, but, hey, at least it went right to the second baseman so we didn’t have to stress about if it was going to be a double play.

A man stands alone at the plate. This is the time for what? For individual achievement. There he stands alone. But in the field, what? Part of a team. Teamwork. Looks, throws, catches, hustles. Part of one big team. Bats himself the live-long day, Babe Ruth, Ty Cobb, and so on. If his team don't field...what is he? You follow me? No one. Sunny day, the stands are full of fans. What does he have to say? I'm goin' out there for myself. But I get nowhere unless the team wins.

...before whomping on him with a bat. Cain never did that. That takes real discipline

No, Cain kept his head up. And when he allowed a single unearned run in his first playoff game, it was the margin of defeat after his bullpen coughed up the game. A normal human would have figured that he really was cursed. A normal human might have given up. 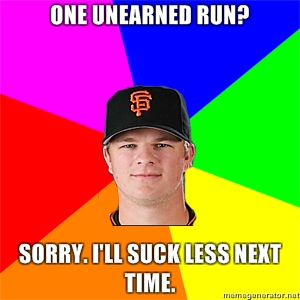 He went home, got a cup of chamomile, put on "French Kiss," and thought about what he needed to do for the rest of the postseason. He scribbled notes on scraps of paper, watched film, and concocted a sweet plan. 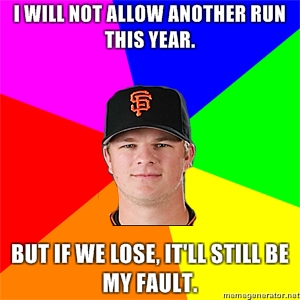 Clever plan. And it worked. So while I’m not smart enough to hop into the debate between the FIP partisans and the xFIP insurgents, I’d like to think that I know enough to realize that Matt Cain is awesome. He’s humble, he’s bright, and he’s funny. He’s talented, he’s a competitor, and he seems like a fantastic teammate. He’s a Tennessee kid who fell completely in love with the city of San Francisco, and the feeling is completely reciprocal.

He’s also a World Series winner, and I'm probably happier for him more than anyone else in the organization. Dude's seen some bad times.

I love Tim Lincecum’s down-the-hall-of-your-dorm aloofness, I love Brian Wilson’s willingness to go on national TV dressed as a sea captain, and I love how Buster Posey catches for our sins. But Matt Cain just might be my favorite Giant. For that, I project continued awesomeness.