Come on. You know it's true. From the Chronicle:

"Covelli has made it clear that he would like to play for a team that is determined to compete, and he'd also like to stay on the West Coast," Comte said, using Crisp's first name. "I think the Giants would be a viable option for him and vice versa."

Let's see what's going on with the teams on the West Coast:

The Mariners might be interested. Crisp has that perfect mixture of great defense and passable offense that attracts Seattle, who will blissfully ignore that every single player with passable offense goes there and morphs into a hungover Hal Lanier. 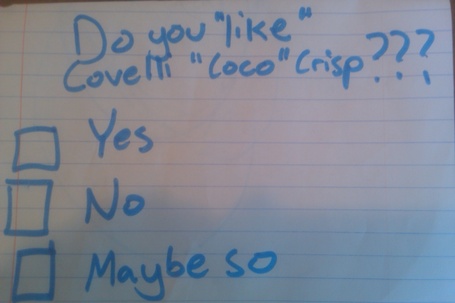 Sounds like Giants more likely to spend their few available $$$ on CF rather than SS (Reyes, Rollins)

There's a chance the Giants will pursue Sizemore. A small chance, and that's a post for another day. But every single sign in the baseball world is pointing to Coco Crisp on the Giants. It's inevitable. And I think Crisp is a fine, worthwhile player, he is a lateral move at best, which makes this all very strange.

Crisp will have the occasional above-average season offensively, but for the most part, he's very predictable. He plays a great defensive center field, he usually has an OPS+ around 91 or so, and he steals bases at a very high rate. He's a good player.

For a team that can't score runs, is claiming that funds are tight, and already employs a fantastic defensive center fielder who is cheap, he is an absolutely bizarre player to target. Just bizarre. I know that Andres Torres had a down year with the bat last year, and that there are concerns with his ADHD and patterns of sleeplessness, but the only thing I would put money on him doing worse than Crisp next year is steal bases. Torres was good for 2.1 fWAR last year. Crisp had 2.2. I'm not wild about using WAR as a definitive way of ranking players, but if the theory is that Torres and Crisp are similar players, the stats back it up.

Crisp might be an upgrade. He might be the better player next year. But right now the Giants have nothing at shortstop. They're going to have to overpay Carlos Beltran to stay, and they might be reluctant to do that. They aren't going to go after a premium free agent.

When the offseason is over, we might look up to see that the Giants spent all of their money on left-handed relievers and a defensive-minded center fielder. And Ryan Ludwick. Always Ryan Ludwick. That would be ... disappointing.

There are other options. A trade for B.J. Upton would be similarly redundant and cost prospects, but it's a possibility. Ross is still out there. Hey, so is Rowand.  Rick Ankiel! But nothing seems quite as inevitable as Coco Crisp on the Giants, leading off on Opening Day, 2012. Get used to it.