Matt Cain and the Yankees

Share All sharing options for: Matt Cain and the Yankees

Part of my job is to sift through all sorts of baseball articles. Good ones, bad ones, in-between ones. And because I'm so damned smart and sure of myself, I've picked up the skill of anticipating what stories the baseball world will glom onto. To put it in nerd terms, I'm a poor man's Ozymandias, but for baseball only.

And I hate to tell you this, but things are going to get weird for a little bit when it comes to the Giants. Here, take a look at this ultra-accurate graph from the future that I did not just pull out of my butt: 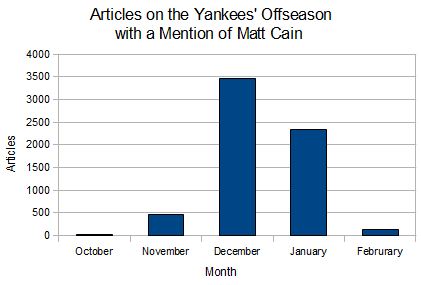 The Yankees have some issues, see. CC Sabathia might opt out of his contract, and even if the Yankees do re-sign him, they probably aren't going to count on Freddy Garcia and Bartolo Colon having repeat seasons. They'll look for starting pitching.

And when the Yankees need something, a few people who write about the Yankees are obligated to assume that the non-Yankees in baseball are for sale. There are 29 other teams, but they're just like the human power plants from The Matrix, with pods filled with baseball players who exist only to serve their pinstriped overlords. Matt Cain is in one of those pods. And the Yankees have a need.

It starts with an unnamed source:

One major-league source I talked to yesterday said that Matt Cain was hiding in his closet, wearing a tanooki suit, and ready to make a run at the warp whistle. These sources are all over the map. A scout thinks that the Giants might be convinced. Okay.

That gets the names out there, and things snowball:

Scuttlebutt down in Tampa has the Yankees interested in sending out "feelers" to the Giants about the availability of Matt Cain.

Now there's scuttlebutt. You know what that means: 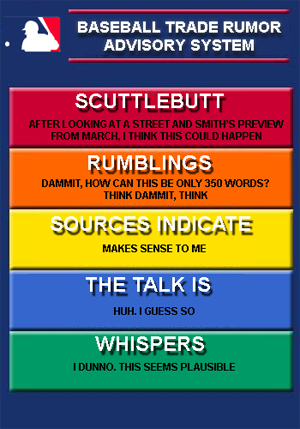 And it's not going to stop. There's just a brief lull because of the World Series, but even when a well-known columnist writes a thing like this ...

For those on the Matt Cain bandwagon, I heard the Giants have made it so clear they are not trading him that the Yankees have not asked about the righty in "years."

... it's not going to stop. Jesus Montero for Matt Cain is the new Cain 4 Fielder. Even though the Giants have exactly three young hitters of note, and two of them play they two positions that Montero might play, it's Montero for Cain? Cain for Montero? This will go on until Brian Sabean custom makes an "I'M NOT TRADING MATT CAIN, YOU JACKASSES" hat, and wears it during an interview with Oprah. Until that day, hey, it could totally happen.

A Totally Well-Researched and Viable Article
by Writer

Remember when we were sick of baseball games a month ago? We had no idea.