Share All sharing options for: An image-heavy ranking of the teams Giants fans should root for to win the World Series

This is at least a 4,000-word essay. Heck, if you count each frame in the .gifs to be separate pictures, you'll have all sorts of reading to do.  In order from least-rootable to most-rootable ...

Best case outcome: A humiliating defeat in Game 7 of the World Series. Something that people will talk about for years, like the Don Denkinger call. I'm thinking it should be Tony La Russa accidentally double-switching in Dave Duncan, who gives up the game-winning homer.

Worst case outcome: Another World Series win. Seriously, they have ten. That's second only to the Yankees.

Worst case outcome: Eh. I'm kind of over Prince Fielder hate. But then I think of this guy cracking a smile.

And they can't rank higher than #3.

Best-case outcome: I get to use that .gif to warn people who act up around here. 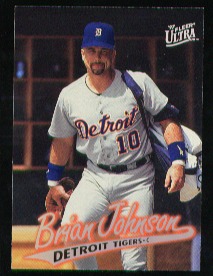 I'm sure if I were a hockey fan, I'd be far less forgiving, but the Tigers and Detroit really don't mean anything to me other than Brian Johnson. And maybe the beginning of True Romance.

Worst-case outcome: What, Jose Valverde acting the fool? I love when players make ostentatious on-field celebrations! Always have. Look it up.

Best-case outcome: A Tigers World Series would be for the people who watched every single one of their 119 losses in 2002. You know there are people who intentionally did that. They deserve some champagne. 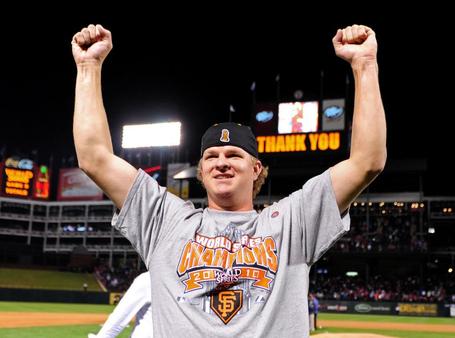 The "thank you" behind Cain is the key. That's a picture in Texas. Cain's wearing a golden dong hat, and it's beautiful. Thanks for all that stuff back there, and all that.

Worst-case outcome: Political discussions. Stuff like that. People in Texas all happy.

Best-case outcome: A team that hasn't won a World Series wins one. I'm kind of a softy for that stuff. And the team happens to have been really cooperative with the Giants in the past.