Share All sharing options for: How Hubie Brooks made me throw imaginary cash at a corporation that isn't interested in taking it

The 1998 Home Run Derby was on the MLB Network last night*, and it was interesting on a couple of different levels. Just about every hitter in the thing was chemically enhanced. Sure, McGwire and Palmeiro are the obvious big names in retrospect, but now we know that even Moises Alou was applying diaminomethanal to his hands in order to get a competitive advantage. The whole thing was dirty. Fun to watch, too.

There’s nothing better than watching classic baseball with a laptop. A Mark McGwire sighting leads to the first round of the 1984 draft, which leads to Alan Cockrell, which leads to the 1985 Shreveport Captains, which leads to Matt Nokes, which leads to Bob Melvin, which...you get the point. That’s just five minutes of furious clicking, with Chris Berman back-back-backing in the distance. Baseball’s nostalgia isn’t just limited to the obvious, Bobby Thomson kind of moments. There’s a ton of fun in looking up random, almost-forgotten players.

For example, here are the five most random Home Run Derby participants since it became an All-Star tradition in 1985:

I came up with that by culling lists over at Baseball Almanac, and it got me on a Hubie Brooks kick. I remembered him as an Expo -- 100 RBI in 1985! -- and a Met, though he apparently skulked around with the Dodgers for a season. I remembered this card growing up. I sort of remembered Hubie Brooks. Then started wondering why he was within 300 yards of a Home Run Derby. What kind of swing did he have? What kind of player was he? To the internet video archive!

Yeah, there isn’t a video of Hubie Brooks out there. Of course there isn’t. I’m not even going to bother checking YouTube. If MLB took down a video of me catching a Vinny Castilla foul ball, it's obvious that they’re really, really digging through the bowels of the internet to remove every baseball video that doesn’t come from MLB.com. It’s not a surprise that there isn’t any Hubie out there. He wasn’t a big star, and he never played a game after the strike in ‘94. But, really, there’s no way to get anything from before 2000. For a game that wants you to put nostalgia in a paper bag and huff it until you pass out, they sure don’t make it easy to watch old games.

So here’s my appeal to Major League Baseball: You have archived video. Millions of hours of video. There is something called the internet. Put the video on the internet and take my money in exchange for it. Take my money. Here. I have fistfuls of the stuff that I will give to you in exchange for more baseball-related products. Because while it might not be that ridiculous that your site is Hubie-free, there are serious, serious problems with the current arrangement: 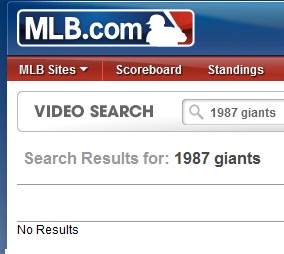 The internet is awesome for baseball. Baseball-Reference.com is unbelievable. Being able to watch a Giants game if I’m in Sweden is amazing. The Pitch f/x stuff is just getting better and better. But the only thing that’s missing is a legitimate video repository. Imagine a site that’s one part YouTube, one part Baseball Reference, where searching for something specific leads to an endless stream of tangentially related baseball. Maybe MLB is working on something like this -- it’s not like it’s something an intern can whip up overnight -- and that’s why they’re so draconian with their YouTube policing.

Maybe. But I want it now. The iTunes baseball library is a shell, especially when it comes to games before the advent of the internet. MLB Advanced Media is making gobs of liquid money through their current arrangement. They could make so much more. And then the money will trickle down to the teams, and they’ll spend the money on crazy contracts to players like, oh, Aaron Rowand, which will send nerds like me into a frenzy, which will raise blog page views, which will boost blogging incomes, which we’ll all give right back to MLB Advanced Media. The cycle of life, that is.

So I’ll just stuff some cash into an envelope and leave it on the kitchen table. I’ll write "I ♥ MLB!" on it and seal it with a smooch. Pick it up whenever you’re ready, Bud.