Andres Torres is asking for $2.6M in arbitration. The Giants are offering $1.8M. I’ve never rooted harder for a player’s arbitration case in my life. Torres isn’t going to reach free agency until he’s 35, and he’ll never get a huge multi-year deal. Every $100K counts for a guy with a window as limited as this. Just give him the money. In fact, throw in an extra million, and tell him to buy something nice.

"A 32-year-old career minor leaguer has an All-Star-type season as the San Francisco Giants actually win the World Series. Do you really think this happened? I notice you’re all looking at me right now. That’s because your subconscious feels that someone else is creating this world. The more I change things, the quicker the projections start to converge on me. It's the foreign nature of the dreamer. They attack like white blood cells fighting an infection.

I don’t have much time. Look at this spinning top. It means something. It means that Andres Torres should be paid $800K less than you think he should. Quickly, before the city folds on top of us all crazy-like."

"According to a statistical database known as ‘The Fan-Graphs,’ Andres Torres was worth $23.9M last year, but paid less than $1M. Aaron Rowand was worth $2.1M, but paid $12M. Here is Rowand’s number, and here is his address. I trust you can settle this like gentlemen without having to rely on loopholes like arbitration."

3. The Appeal to Medical Science

Lenny Dykstra was an All-Star with his appendix. He was out of baseball just a season after having it removed. He was only 33 when he retired.

Andris Biedrins didn’t even get one lousy hit after returning from appendicitis.

Tris Speaker underwent a rare operation in 1916 to have three appendixes added. Look it up. His nickname -- ‘The Grey Eagle’ -- was a shortened version of his full nickname, ‘The Lumpy Grey Appendix Eagle.’ Again, look it up. He was one of the best ever

So you see, gentlemen, Andres Torres’s appendix was filled with center fielder bile, and without this, his center field humors are out of balance. I would suggest a blood-letting, but this is an arbitration hearing, not a doctor’s visit." 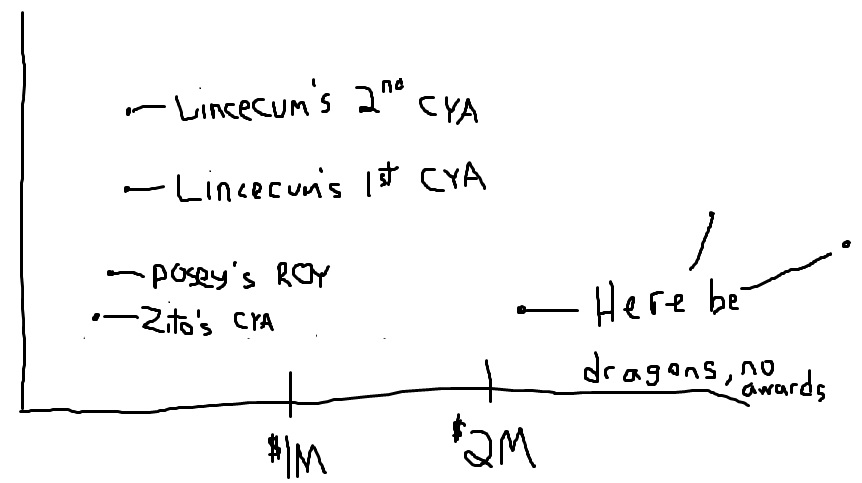 "Gee, I would think that Andres would want an award. I thought he had more pride than this, to throw away a chance at greatness and immortality for a measly $800K."

Anything goes in arbitration. My guess is that the Giants settle before the actual hearing, possibly for a two-year deal. I hope so. Because if Andres Torres can help the Giants win a World Series, he really doesn’t care that there be dragons. He’ll slay the dragon with his bare hands and possibly his superior range. Good luck, Andres.