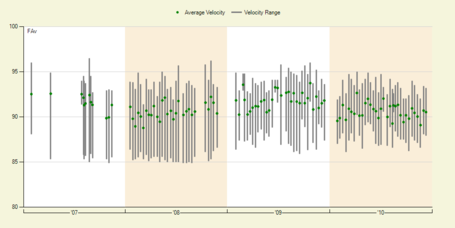 Everyone knows what Jonathon Sanchez did this last season.  He finally turned the corner and put all his stuff together for an impressive season:

or did he?  Most people who follow the SABR stats pretty closely expect a pretty strong regression.  And, in fact FIP and xFIP have shown him to be exactly the same pitcher three years running:

I decided to look at some more detailed data to ferret out the truth.

Joe Pawlikowski sums up the argument against Sanchez nicely:

The reasons for my bearish view on Sanchez’s 2011 don’t center on BABIP, though his .262 mark from 2010 certainly won’t hold up. That will affect his ERA right away. He’ll also probably have worse infield defense behind him, as he’s going from Juan Uribe toMiguel Tejada at shortstop. What really worries me about Sanchez is his high walk rate combined with average-ish home run rate. His HR/FB ratio was right around the 10 percent rate we use for xFIP, and has been around that mark for his career.

Those two factors then further combine with his high strand rate — 79.5 percent, well above his 72.2 percent career rate and fourth highest in the league in 2010 — to create a situation that he probably won’t sustain. If his LOB% falls to his career level next year, those walks are going to hurt more. The home runs will hurt more. I’d expect his ERA to climb into the 3.90 to 4.20 range next year. While that’s not bad by any stretch, it’s considerably worse than his 2010 performance. 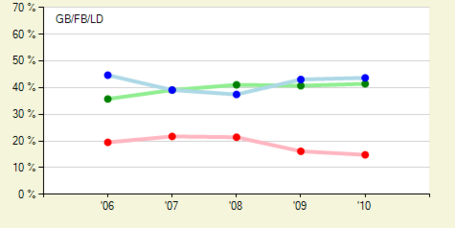 Sanchez is clearly decreasing the number of line drives he gets in both 2009 and to a smaller extent in 2010.  But pitchers have only marginal control over line drive rates.  So, is Sanchez just getting lucky or can he really suppress line drives marginally?   Looking at his month by daily graphs reveals more. 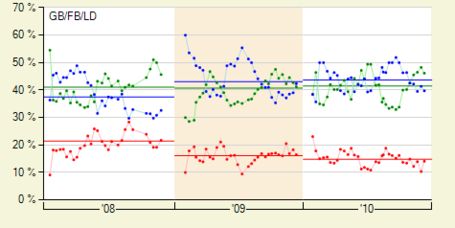 I decided to dig a bit deeper:

Let's take a look at some Pitch F/X data

Two things jump out at me:  (1) He's using his curve a lot more. Notice the dramatic increase in blue dots.  More importantly, (2) His changeup and fastball have much greater vertical separation. The second one is the important point.  The changeup is designed to look just like the fastball except drop out of the zone near the batter.  The more vertical separation you get, the more likely the batter will misjudge and swing over it. 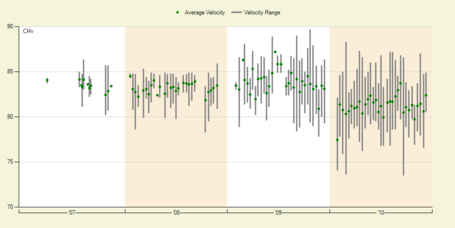 Dirty's changeup now sits at 81.3 mph rather than 83.8 mph.  His fastball also dropped 1mph, so the relative difference is only 1.5 mph. That extra 1.5 mph difference means it has more time to drop before it enters the strike zone. Sanchez improved his changeup significantly in 2010.  Batters had to adjust, and that allowed all of his other pitches to get better as well.  Indeed, his whiff rate was up around 1.5% for his slider, curve, and changeup in 2010.

Reader Vaccaro asks about his fastball, which dropped 1mph from 91.6mph to 90.6mph: 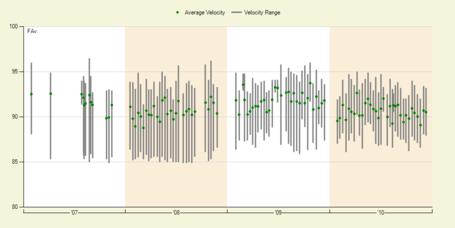 In going over his splits, I uncovered one last detail about his 2010 performance:

In high leverage situations, 2009 Dirty struckout only 6.75/9, walked 12/9, gave up 2.7 HR/9(normally 1 HR/9), and gave up a 23% LD%.  In 2010, he struckout 7.4/9, walked 5.4/9, gave up 0.49 HR/9, and gave up a measly 7.3% LD%.  His 2009 performance reeks of panic and immaturity, which any Giants fan could tell you about.  His 2010 performance looks like growth and maturity if you put on rose-colored glasses, and looks like some growth (normalized walk rate) coupled with a healthy dose of luck (absurdly low LD% and HR%).  The problem with using high leverage situation stats is it suffers from absurdly low sample size issues: 6.2 innings in 2009 and 18.1 innings in 2010.  The small number of innings means it's hard to draw conclusions.  Even if he was absurdly lucky, 10% more LD% would only result in ~4 more hits in those high leverage situations.  Oh, the top pitchers in the game have shown the ability to suppress LD%, HR%, and BABIP during high leverage innings by sacrificing K-rate, exactly what Sanchez is doing.  Although none of them have shown it to this extreme degree.

So was Dirty's 2010 a real effect?  I've presented evidence that his stuff noticeably improved in 2010.  His changeup was a much better pitch, which allowed him to use his curve more, as well.  Is this evidence strong enough to conclude that his BABIP and LOB% for 2010 weren't flukes?  Hard to say... at least some of the LOB% was luck, but part of it seemed like an improvement in his maturity as a pitcher.  As far as BABIP,  I'm loathe to go against all the BABIP data we have of pitchers regressing towards the mean.  I will say that at least part of his 2010 improvement was due to an improved changeup and other off-speed pitches. How much of what remains is luck?  We'll find out in 2011!