Since the Giants reached the peak of Mt. Discouragement – at the exact midpoint of the season, no less – they’ve gone 47-28. The season turned around, and how. Why, maybe it’s easier to explain in graph form: 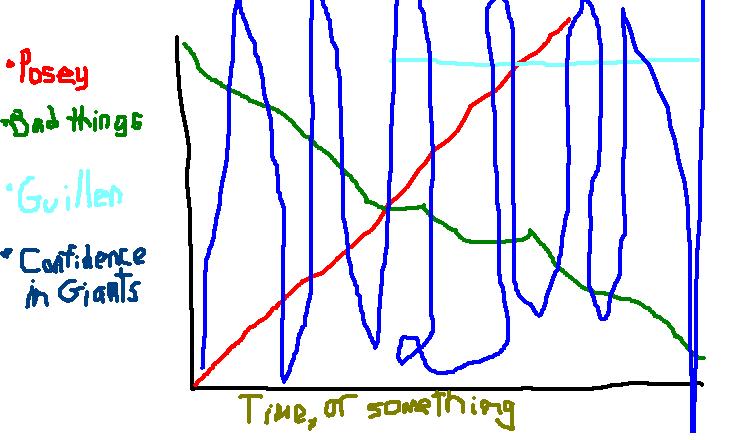 Yeah. That’s about right. In the second half of the season, the Giants have played 14 series against teams that are currently under .500. They’ve won eleven of those series, split one, and lost two. There’s a part of me that thinks, gee, the Giants always seem to play down to the level of the under-.500 teams. That part of me is wrong. The Giants have actually been fantastic against below-average teams.

Yet this series is still ulcer-worthy. Maybe it’s residual panic left over from the last time the Diamondbacks were in town, which is one of the series losses referred to up there. The Giants were in the middle of a starting pitching meltdown. The division was surely lost; the wild-card was slipping out of reach. The Diamondbacks were there to witness and contribute to the carnage. No matter how miserable of a season a team might be having, it’s always nice to stomp into a division rival’s ballpark and leave the toilet seat up.

Never underestimate the desire of a team in a lost season to tinkle all over the hopes of a contending division rival. It’s a real, palpable desire. And that’s what scares me. It’s why I would watch games in September of ’05, ’06, ’07, and ’08. Maybe Dan Ortmeier would do something to win a game, and I could picture a Diamondbacks fan pacing around, teeth gritted with rage, trying to find something that looked like a Dan Ortmeier to punch, but failing because he wasn’t sure exactly what a Dan Ortmeier was. That was fun. It didn’t happen a lot, but it was fun.

Now I’m worried about the karmic retribution. I regret the schadenfreude tokens I spent back there. I’d prefer to receive the bill in a couple of decades, please.

I would like to apologize for my comments about Stephen Drew in the last Diamondbacks series preview. I was hoping that the new GM for the Diamondbacks would read it and – because I was named one of the top-50 most influential blogs in the world by Forbes (citation) – be convinced to trade Drew to the Giants for pennies on the prospect dollar. Alas, he then proceeded to have 11 extra-base-hits in 10 at-bats. So he is not the hitter to watch.

There is no hitter to watch. That always backfires. I’m not going to pick someone like Konrad Schmidt as the player to watch. I’ve never heard of him, and he’s the player least likely to completely crush the Giants with some late-inning hit. So it would be nuts to pick him.

Seriously, though, it’s kind of tired to pick out some control specialist and make fun of how the Giants offense will flail when he’s on the mound. The Giants aren’t the league-worst offense that they were last year. They can hit when the mood strikes. So I would like to beg them to hit Rodrigo Lopez tonight. Please. This is the last chance they have to see a below-average pitcher for a while. And Lopez certainly is that. He wasn’t good enough for the Orioles. Please, please, please don’t make us watch a Rodrigo Lopez masterpiece, Giants.

Superstitions are silly. Fun, but silly. So I don’t really think that by calling out Rodrigo Lopez’s name that I’m dooming the Giants. I’m not magic. The world only partially revolves around me. I just wouldn’t be able to stomach a Rodrigo Lopez masterpiece. Please, no.

A Rodrigo Lopez masterpiece. Chewed cuticles. Rampant scoreboard watching. Torture, and plenty of it. Remember, though, it’s supposed to be fun.