What to do with Pablo

Share All sharing options for: What to do with Pablo

There’s no right answer for the Pablo Sandoval conundrum. Anyone who watched him last year knows what a rare talent he can be. Anyone who has watched him this year knows how mind-numbingly awful he can be. He has to stay in the lineup because the reward is a true middle-of-the-order hitter. He can’t stay in the lineup because he doesn’t appear to have even one average major-league skill right now. Dude’s gotta play through this. Dude’s gotta go. It's just so simple.

Last night’s first inning at-bat against Chad Billingsley was one of the worst at-bats of the year from a Giant, non-Rowand division. With the bases loaded, Pablo swung at a first pitch sinker with movement that took it nearly a foot out of the strike zone. He then took a strike, swung at a pitch at chin level, and went a foot out of the strike zone to swing at a breaking ball. It was a miserable spectacle. Unfortunately, most of the Giants fans watching the game were expecting it.

As a member of the internet baseball nerd orthodoxy, I’m skeptical of clutch hitting. I don’t think Derek Jeter has some sort of gland next to his thyroid that pumps out clutch hormones. I don’t think he can just turn on a switch in tight situations and be even better than Derek Jeter on an average day. And the orthodoxy doesn’t really believe in players who choke, either. If you survived the pressures inherent in making it to the majors, you can probably handle the pressure of a two-out, runners-in-scoring-position situation.

Pablo makes me question the orthodoxy. The horror.

Just yuck. The BABIP hints at some general unluckiness, sure, but Sandoval’s approach with runners on base or in scoring position has been awful. And his overall performance, with or without runners on, has been ghastly in September: he’s had a double, two singles, and two walks in 35 plate appearances.

Last night’s at-bat against Billingsley was the at-bat of someone who either didn’t have a plan, or who had a really bad plan. The first swing could only come from someone expecting a get-it-in fastball. So when the sinker started, it had to look like a corner fastball at first – that is, something distinctly different from a first-pitch, get-it-in fastball. Pablo still swung for the fences and missed badly. I just can’t see how it would be possible to swing at that pitch if it’s the first pitch in an at-bat. There’s no way that was even close to what he was looking for. Maybe he wasn’t even looking for anything in particular, and that’s the problem.

Of course, just like they did with Tim Lincecum, everyone has a theory about what’s wrong. He’s too hefty, he’s bummed about his divorce, he needs to wear his prescription goggles, the league has figured him out, and/or he isn’t mentally strong enough to deal with the heightened expectations. Everyone has an opinion. Maybe a couple of them are right. That doesn’t mean it’s less annoying to hear people speculate, but maybe something up there is the right answer.

And while his BABIP is down, so is his line-drive percentage. He’s swinging at fewer pitches in the strike zone, and swinging at more out of the strike zone. He can’t lay off the high fastball. He couldn’t last year, either, but he would hit some of those high fastballs last year. Something’s different. This is like how I would have felt if "Reload" were released right after "Master of Puppets." What in the absolute hell happened?

Which all brings us to the great divide: Do you sit Pablo, or do you hold out hope that he’ll find what is lost? I’ll side with the latter, even though it’s getting harder and harder to do so. I can’t let go of my memories of the good Panda, and Sandoval was quite good in August, which wasn’t that long ago. A good Pablo would make a mediocre Giants lineup pretty special. Well, comparatively speaking. I’ll just close my eyes, cross my fingers, and hope he can find what he’s lost.

I just don’t know how long the Giants should wait. They’ve shown quite a bit of restraint, actually. Judgment day is a-comin’ soon, though.

So here’s a cute picture of a hamster. If you've made it through this post without falling asleep, weeping, or punching things, you've earned it. 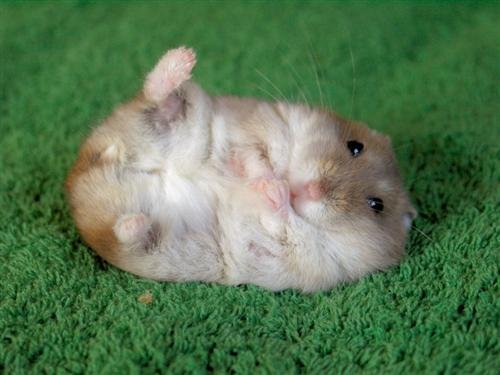