He needed to tweak his mechanics. That was the correct answer. You don’t gain an extra foot or two on your fastball -- and keep the velocity up in the late innings -- when you stop tipping pitches. Tim Lincecum is no longer in this thing, in which "this thing" is defined as a career-threatening funk. Let’s all take moment to look behind us and flip off August. Ffffffff. That one’s for you, August. Tim Lincecum is Tim Lincecum again, which was especially welcome on a day when Mat Latos was not Mat Latos. After Freddy Sanchez struck out on a nasty 97-mph fastball down the middle in the first, I was thinking about ditching the picture-in-picture setup and just watching the Niners game. I would have chosen...poorly. 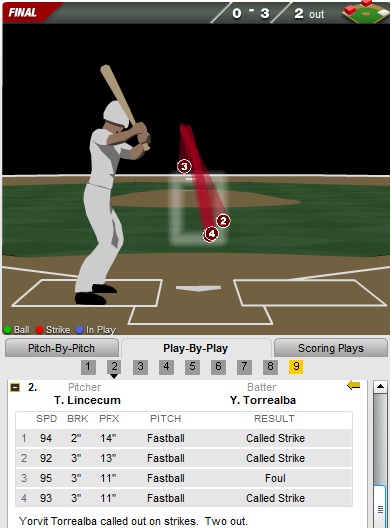 On a ten-game road swing through Los Angeles, Arizona, and San Diego, the Giants won seven games. They started three games back, and they ended up tied for the division lead. There was torture inside, there was magic inside, and there was a creamy, nougat-like substance inside that tasted like victory. They beat the Dodgers in Los Angeles. They beat the Padres in Petco National Park.

Think back to this game, two weeks ago. The Giants had lost three straight, and they were six games back. Barry Zito followed a wretched Lincecum start with an even more wretched performance. Doom. Gloom. There was no way the Giants would contend for the N.L. West this year. Best to focus on the wild-card.