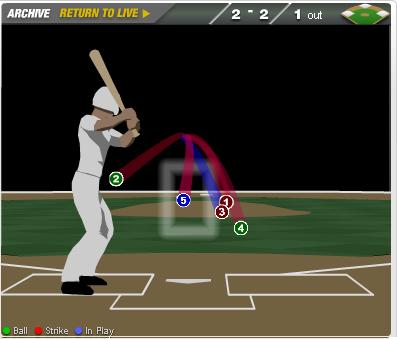 That was Posey’s at-bat in the fourth. There were earlier examples, but this was the most egregious. And the Giants were probably a little shocked. The strike zone was wide today. Jerry Crawford is in the same canasta club as Eric Gregg, and they were playing "Truth or Dare" before each hand. It happens. You don’t want to know what Gregg had to do.

That wide strike zone led to at-bats like this: 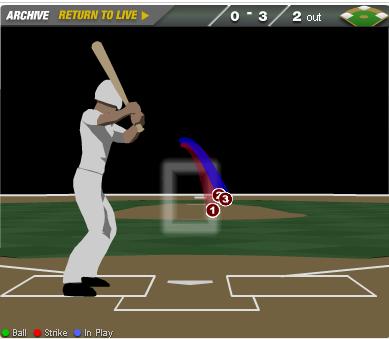 Those first two pitches were called strikes, which meant that Pat Burrell had to swing at the third one in the seventh inning. Quick strikeout with one borderline strike. That’s swell. The strike zone also lends itself to at-bats like this: 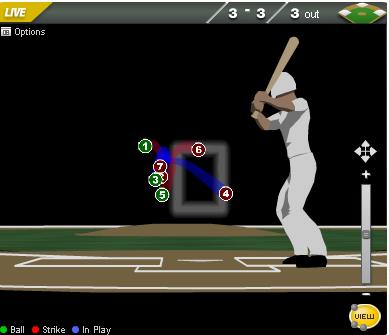 This is from Torres’s at-bat in the eighth. The second pitch was a called strike. It’s hard to see way out there, buried beneath other balls, but it was. That set up the fourth pitch right on the inside corner, which had to look like it was going to hit Torres if he was thinking about pitches six inches off the corner. Of course, he flailed away at a pitch out of the zone that had been called a ball and a strike in the same at-bat.

The strike zone was kind of a joke all day. Madison Bumgarner pitched magnificently, but he didn’t really venture to the outside corner that much. Not enough to benefit from the ridiculously wide zone, at least. Here’s the thing, though, the Padres pitched to that strike zone perfectly. They kept going out there with precision, and when they needed to keep the Giants hitters honest, they’d come in at just the right time. Crawford is an unfunny punch line of an umpire, yes. It was hard to tell where the terrible offense ended and where the terrible strike zone started, sure. But I’m not going to take the game away from the Padres. They took what the umpire gave them. I’d expect the Giants to do the same if the situations were reversed.

I’ll still be bitter when I think about the 0-1 counts that should have been 1-0 counts. And Jerry Crawford should be embarrassed. It was a crazy, inconsistent strike zone. But the game did end like this: 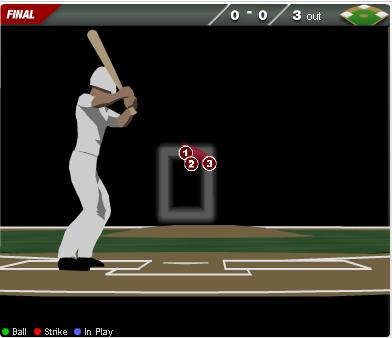 All swinging. Crawford didn’t do that. Posey couldn’t hit Bell’s fastball. Fontenot couldn’t hit Adams’s fastball. There were a lot of at-bats that had nothing to do with Crawford but still ended with an out. It was the typical Giants in San Diego performance. Jerry Crawford was just the trampoline to help Michael Jordan dunk.

The Giants have scored one run in the last 18 innings. They’ve won one of those games. At this point, I’ll just be thrilled at that, and forget this game ever happened. Because it didn’t. What game?

And if Yorvit Torrealba doesn't hit the shortest home run in the history of the park, the Padres would have won on a David Eckstein triple in the 14th inning. So count your blessings that you have the rest of the day to yourself.