The Giants, Jose Guillen, and the big picture

Share All sharing options for: The Giants, Jose Guillen, and the big picture

I get a lot of e-mails from people who disagree with me. When I didn’t like the Bowker trade, I received misspelled missives of barely concealed rage. I’m a hater, see. Nothing but a hater. 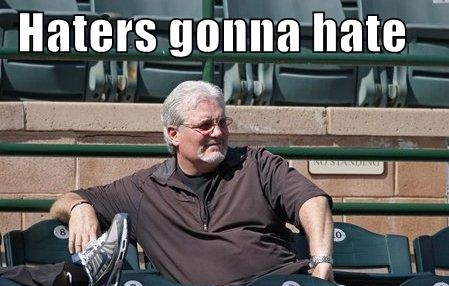 The Giants are doing well, so it’s folly -- dastardly folly! -- to think Brian Sabean still has antiquated notions of how an offense is built. The Giants are in the middle of the pack in runs scored, of course. While the Giants are doing so well, I can’t get too riled up against the tories of the baseball world. Agree to disagree, and...

I’m told the Giants are discussing outfielder Jose Guillen, who was designated for assignment by the Royals today.

Oh. Oh, my. This could be our Lexington. See, Guillen isn’t a good player. He can’t field, can’t hit for average, and he can’t get on base. But he hits home runs and, because he’s spend much of his time hitting fourth or fifth in the Royals’ lineup, he has a fair number of RBI.

If the Giants are considering Jose Guillen, they’re doing so because they consider him to be a run producer. It’s 2010. And I still have a sick feeling that Brian Sabean views RBI as anything but worthless in player evaluation. It makes me think that Mark DeRosa is in a barbershop somewhere with leeches nibbling at his wrist.

But the Giants are doing well, the e-mails will read. The offense is much improved this year, you dolt. When are you going to be happy? I AM HAPPY, DAMMIT. I AM ENJOYING THE SEASON. I ALSO QUESTION THE JUDGMENT OF THE ORGANIZATION WHEN IT COMES TO OFFENSIVE EVALUATION. THE TWO ARE NOT MUTUALLY EXCLUSIVE. DAMMIT.

Ahem. If Sabean signed Aubrey Huff right after the World Series and said, "This is it. This is our first baseman," we would have howled. Sabean could have said, "No, no. I see something that portends a huge rebound. You’ll see. And also, Andres Torres is our starting center fielder over Aaron Rowand," and we would have howled even more. And then, when both players turned into fringe MVP candidates, we would have all looked really, really stupid. But that’s not how it happened. Sabean deserves credit for the acquisitions, but that doesn’t mean they need to be completely stripped of context.

That doesn’t mean that I trust him to evaluate hitters, and you can’t make me. When I read about Guillen -- even if it’s coming from an intern, or something -- it makes me twitch in that old, familiar way. I hope it’s not true.

And I can still enjoy the season in the meantime. Dammit. Not. Mutually. Exclusive.