The Most Interesting Team in the World

Share All sharing options for: The Most Interesting Team in the World

It doesn’t take long to load the torpedoes of whining. Give me a few minutes, and I’m sure I could spit out 1,000 words on why I still hate the trades made on Saturday. I mildly dislike them for the short-term, and I abjectly loathe them for the organizational philosophies they represent. 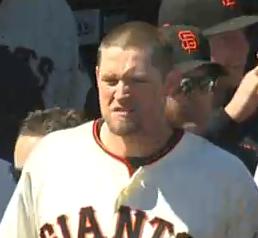 That’s a picture of Aubrey Huff in the dugout after Pat Burrell hit his home run on Saturday. Huff’s reaction to pleasant on-field surprises, apparently, is to seethe with rage and look around for things to punch. I’m not the world’s best lip-reader, but it looks like around 0:29 of the video, Huff looks at someone else in the dugout and says behind gritted teeth, "I’m going to f*** him up." Him being Burrell. Again, who had just put the Giants in line to win. I’m not sure why that deserved a vicious beating, but Huff certainly thought it did.

It was the funniest reaction to a home run I think I’ve ever seen. This team is filled with goofballs and miscreants. Feel-good surprises and golden organizational darlings. The pitching staff has a long-hair and a country boy leading the way, ‘70s-cop drama style. Flotsam and driftwood from the past two offseasons have floated by the cove, finding their way onto the roster and producing like All-Stars. The tea leaves that blew around the Candlestick Park concourses foretold of the catcher who is finally here to rescue us all and help us ascend. The third baseman is a mirthful, jolly fellow. The shortstop wants to bite Russell Martin’s nose off.

This might be the most likable team I’ve ever followed. It’d be hard to beat the homegrown magic from 1986 and 1987, but this just might top it. Maybe it’s just because they’re winning, but this is a fun, fun, fun team to watch. Back in the Jose Castillo Era, I bemoaned the lack of a villain on a terrible team. The team stunk, but the players were pretty likable. It made it hard to properly assign blame and mete out rage. It was frustrating. Every bad team needs some players to kick, and we didn’t have any. This is our karmic payback.

The Bonds/Kent teams were coldly efficient. Loved watching them play, but I never thought that they were in love with playing baseball. Maybe they were, but they hid it well. This team…it’s different.

I’m enamored. I’m agog. This is a fun team to watch. They, like, beat Dodgers and stuff. They want to punch each other when they hit home runs. And I hope, hope, hope they have enough to get them to the playoffs. This could be the kind of team that we are still talking about in a couple of decades. Well, so were the teams from the Jose Castillo Era, but that was a totally different reason.