Defense and the 2010 Giants

Share All sharing options for: Defense and the 2010 Giants

I don’t know quite how to read this chart: 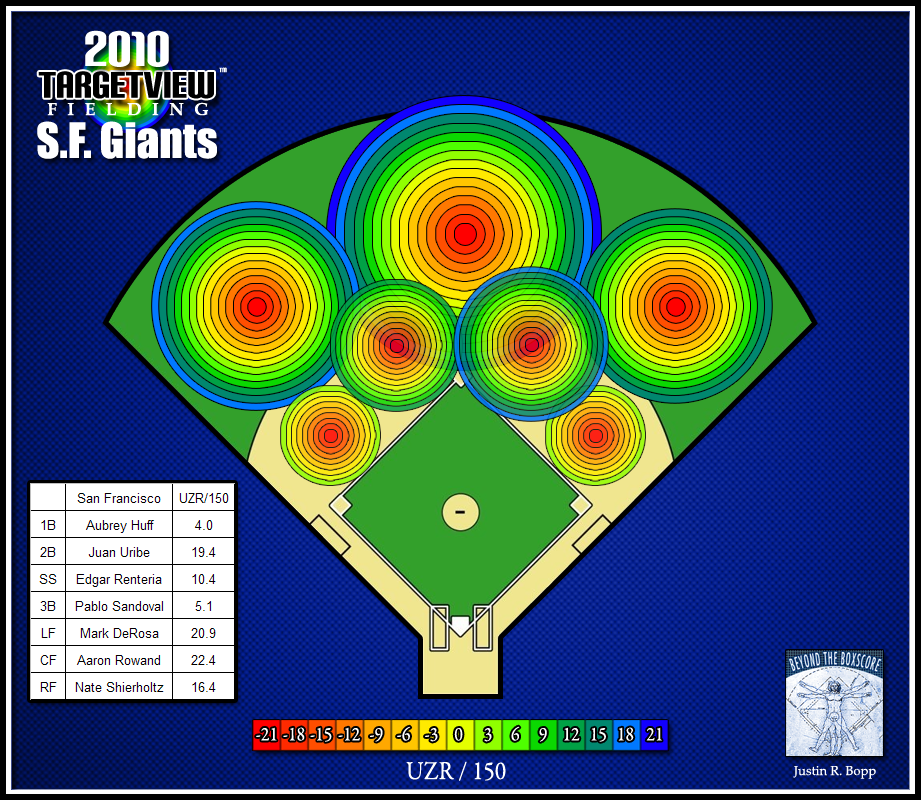 Well, I have a guess as to how it should be read – it involves some peyote, an Emerson, Lake, and Palmer album, and an experienced guide – but that’s just a guess. It seems, though, that it means good things for the Giants. It’s from Beyond the Boxscore, who have a post up with the title…

The Giants: (Playing the) Best Defense in the Majors.

No way. There’s a lovable, jolly fellow at third with good hands, a strong arm, and the range of a pommel horse. There’s a second basemen playing left and a DH playing first. Aaron Rowand is spectacularly average, and Edgar Renteria is deadly with balls hit within his range, which is approximately two inches on either side of Edgar Renteria.

Second reaction: This is just all sample-size chicanery. When the season is done, the numbers will all be closer to what we’d expected. Only Nate Schierholtz will be worthy of Gold Glove consideration, and he’ll have a shot if he keeps hitting .330. So I will use this second reaction to reinforce the first reaction, and I shall call it science.

Third reaction: Wait a sec, the Giants’ defense really has been good this year. They haven’t made a lot of errors – only 16 so far, which is just about how many Russ Davis has had since he retired. Huff, who was supposed to be a clankmitt of legend, has been just fine. Whomever the Giants stick at second seems to be able to turn tough double plays and range far up the middle. Renteria hasn’t had a lot of 27-hoppers just go under his glove, which didn’t seem to be case last year. So even though I don’t understand these newfangled defensive stats, I can kind of validate my loose anecdotal theories with them.

Fourth reaction: Probably a combination of everything up there. The Giants have been really, really good defensively this year. So good, in fact, that it will be almost impossible to keep up. There are definite sample-size issues. Still, the hope I can take away from this is that Pablo’s range is just fine, Huff isn’t Mike Piazza at first, and I’m being consistently unfair to Renteria’s lateral movement.

On a contending team with a lot of things to worry about, here’s hoping defense isn’t one of them.