Last season, Pablo Sandoval hit .330 with a .387 on-base percentage and a .556 slugging percentage. He led the team in walks and home runs, and was tied for second in triples. Hey, he was also seventh on the team in stolen bases. Look out, ’85 Cardinals.

That’s all swell. We all know he was the only good hitter in the lineup last year, and depending on your appreciation for Mark DeRosa, Sandoval is probably going to be the only good hitter in the lineup this year. What often gets taken for granted, though, is just how freaking young he is. For some perspective, here’s a post from my 2010 top-30 prospects list. Well, not the one that was posted here, but the one posted in an alternate dimension:

3. Pablo Sandoval was 22 in the California League last year – so even though he was helping save humanity from the space locusts instead of playing baseball for the last two seasons, he still wasn’t so old that we shouldn't get excited about his performance in 2009 (.330/.387/.556, 25 HR, 52/83 BB/K in 572 at-bats). He hit for average and power, and his walk rate even climbed a little bit. He proved that he could play a decent third base, which helps his value a little as well, even if he isn’t going to catch again.

The Giants haven’t developed an All-Star position player since RBI Baseball was released, so it’s easy to get a little excited here. If everything goes right, Sandoval will continue hitting at AA, and maybe he’ll get a midseason promotion to AAA. And if things go well at AAA, you might see him get a cup of coffee in September. And if things go well in his 15 September at-bats, the Giants might keep him on the major league roster for a little bit in 2011, jerking around with his playing time and stifling his development in favor of half-busted retreads.

So I’m looking forward to Sandoval establishing himself in 2012 and becoming the first All-Star position player to come up with the Giants since Matt Williams. Then the world will end, but that’s only because the Mayans were Giants fans too, so they had some idea how this would turn out.

We’d all be excited about Sandoval if he had the same performance in A-ball at the same age. He’d be a top prospect in the organization. Instead, he had a ridiculously productive season in the majors as the only hitter in a bad lineup, in a park that hurts power numbers for left-handers. He finished seventh in MVP voting while charming the pocket protectors off of all of us. And he’s already good. We don’t have to worry about the Giants finding a lineup spot for him, and we don’t have to worry about the Giants signing Joe Crede to block him in 2011.

But will he regress? The established projection systems:

So pretty. Even though Sandoval’s 2009 was a bit of a surprise, the abacus twiddlers don’t see him giving a lot of those gains back. And when you watch him hit – when you watch him square up a pitch that almost hits the third-base coach in the knee – you know you’re watching a fellow with an unusual skill set.

If you want pessimism, take it back to last year. That projection was a poor attempt to feign responsibility. Not this year.

One more season like last year’s, and he’s tied in awesome points with Tim Linececum. We sat through the Lance Niekros, the Tony Torcatos, the huddling hackers yearning to breath free. We’ve earned this. Thank you, Pablo. 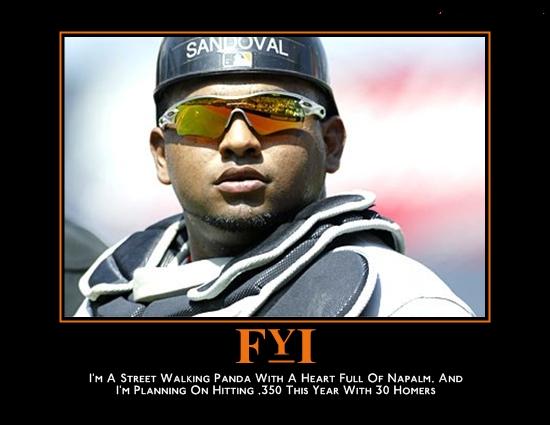