Update: If you have interest in the league, please vote in the comments section about how the league is filled.

CBSSports.com is an SB Nation partner and paying sponsor of the SB Nation baseball communities. This post is one of a series of sponsor endorsed posts related to the CBSSports.com Fantasy Baseball Commissioner League.

Don’t like a fella trying to shill a product for some extra scratch? Then wait for Monday’s post. This one is paid for. But, I can tell you that the product I’m hawking, CBSSports.com Fantasy Baseball Commissioner League!, is one that I’ve used for several years now, and I dig it a lot. I’m using it for my league this year, The Bridges of Madison Bumgarner.

Before you click the jump, know this: you a) should buy CBSSports.com products and/or services, and, b) will get 50% off the CBSSports.com Fantasy Baseball Commissioner League when you do so through this link.

Every year, I’m in 84 different fantasy leagues, and by July, I can’t keep up. Then I look up in November, and I’m like, "Hey, I guess Felipe Lopez is pretty good. I should have started him instead of...Kevin Frandsen? Why didn’t I replace him when he was sent down to Fresno?" So this offer comes up for me to get a free fantasy league -- and cash! -- for hawking the fine, fine products and/or services of CBSSports.com Fantasy Commissioner League, and my shoulders slumped. Another fantasy league? Yeesh. I don’t have time for the 84 that I’m in already.

Then I got an idea, mostly because I’m so damned smart: a league that drafts and then walks away. It’s the five-card stud of fantasy baseball. Albert Pujols pulls his spine muscle in the first game? That’s a shame. You can’t pick anyone up, though. Not in the McCovey Chronicles Stud League. No, sir. Draft your players, and then watch helplessly for the rest of the season.

So who’s in? I’ll need 11 volunteers. The prize for winning the league is this: I get paid by CBSSports.com, and you get to start another league for 50% off. Win/win!

CBSSports.com Fantasy Baseball Comissioner League is a mighty solid service. Seriously. Huckster Grant aside, it’s much better than the Yahoo! stuff you’re used to. You can create your own polls, too, like this one from my league’s archives: 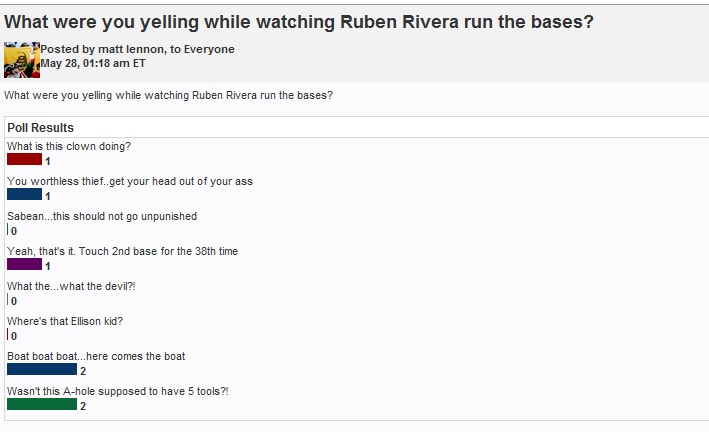 Who’s in? I guess the first eleven who respond are in, but you have to be willing to do nothing after the draft. That part is key. And I want a live draft, so you’ll have to be able to do a draft on a Sunday or a weeknight. We’ll work that part out once we know who’s in the league.