Jayson Werth and the Giants

Share All sharing options for: Jayson Werth and the Giants

The best comparison for Jayson Werth -- a tools-laden disappointment in his early career, and a good middle-of-the-order hitter right around age 30 -- is Henry Rodriguez. Baseball Reference gives a few other names as comps... 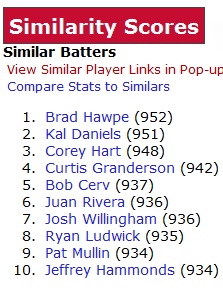 ...but they’re not quite as accurate as the Rodriguez comp. Brad Hawpe just woke up in a closet in Laos, chewing on his own glove, not sure how he got there, only remembering that it all started with a pop-up to shallow right; on the other hand, Werth is a good fielder. A minor difference between the two. Kal Daniels was a preternatural talent who chewed up major league pitching from an early age, but his knees failed him before he turned 30. Werth’s career path is almost the compete inverse.

But Rodriguez is one of the better comps out there. And he was done by the time he was 32. Werth is 31, and he just got a Barry Zito contract. Werth is a danged good player, but he isn't great, and he's already on the wrong side of 30. It probably would have been more practical to buy Finland, set up a baseball academy there, and make a law forbidding any other team from signing Finns, but now we're just splitting hairs.

The Giants could have used Werth. Really, really could have used him. He's a right-handed hitter who plays a position that the Giants needed to fill at the beginning of the offseason. The Giants didn't even try to make eye contact with his agent, and that was before anyone knew he was going to get a truly absurd contract. The Giants were out on Werth from the last pitch of the World Series*.

Now, there are a couple of reasons that the Giants can't really outbid anyone these days.

Yes, but if you can think of an easier way to get a fifth starter and a fifth outfielder, I'd like to hear it.

But even after the Zito and Rowand deals end (2034), I don't think the Giants are going to give out a long-term contract to a player outside of the organization for a long, long time. Because while those are the obvious misses, the front office also remembers that at one time or another, the Giants offered about $200M in contracts to Alfonso Soriano, Carlos Lee, Gary Matthews, Jr., and Juan Pierre. And as the Giants were busy getting out of their own way, they won a World Series with a combination of short-term deals and pre-arbitration youngsters.

For the next, oh, decade, you can just ignore the top five or ten names on the list of pending free agents. It's not that the Giants can't afford them, per se, it's just not a practical way of building a team. It never really was, but the Giants are now as allergic to long-term free-agent deals as any team in the game. Good.

Comment starter: Guess the year that a non-homegrown player gets a deal from the Giants worth more than $50M. I'll go with 2019. Gerrit Cole is just that good.