To the grizzled Giants lifers, it’s pretty freaky that both Matt Cain and Tim Lincecum came up from the minors – within two seasons of each other, mind you – and pitched well right away. There was no lost season, no gruesome adjustment period. They came up, got restaurant tips from the concierge, and started to make NL batters look silly in the same afternoon they arrived. That is not what old-timey Giants fans expect out of their pitching prospects.

(Side note: Another thing the old-timey fans didn’t expect was a World Series championship. But the Giants won their first title since moving to San Francisco, defeating the Texas Rangers four games to one, and completing the World Series victory with a win in Game Five on November 1st, 2010.)

It wasn’t always like that. It probably won’t be like that again. The Giants have a long history of pitching prospects who came up with a bunch of hype but ended up being a tick above average, or who lived up to the hype before succumbing to injuries, or who came out of the gates quickly only to slide into mediocrity. You know, the Giants and 29 other teams. But it always felt like it was only the Giants who were waiting patiently for a homegrown ace that would never come.

Scott Garrelts had as good of an arm as any of them. He was a first-round pick and a strikeout machine – in a league with a 5.5 K/9 ratio, Garrelts averaged over a strikeout per inning in his first full major league season. As an 18-year-old in the Midwest League, he only allowed two home runs in 176 innings, a testament to the heavy, natural moment on his sinker. Sure, he also walked 149 hitters in those 176 innings, but…

Good gravy. One-hundred-and-forty-nine walks. I’m assuming he threw 150 pitches every start. And yet somehow, he blew out his arm. Crazy.

Garrelts actually ironed out his control problems pretty quickly in the majors. He went from a 22-year-old who walked 7.1 batters for every nine innings to a 24-year-old who walked 3.8 batters for every nine. And when Garrelts led the National League in ERA, picking up a couple Cy Young votes along the way, his BB/9 was downright impressive at 2.1. He was one of Roger Craig's split-finger proteges, and in ’89 the Giants won the pennant, and Garrelts was one of the brightest young pitchers in baseball. Heck, just listen to Brett Butler:

(The Giants and the Cubs have) two solid stoppers: Steve Bedrosian for us and Mitch Williams for them. We each have a crafty veteran in Rick Reuschel and Rick Sutcliffe. We also have up-and-coming young pitchers in Greg Maddux and Scott Garrelts.

I didn’t run the WAR numbers, but I think Maddux had the better career. Still, did Maddux ever lead the National League in ERA? Well, sure, he did it four times, but did he ever do it in the ‘80s? Exactly.

In 1990, Garrelts was ineffective as his strikeout rate plummeted, though he did have flashes of his old dominance. In 1991, he pitched the last 20 innings of his major league career. He stuck around for another three or four years, pitching in the minors and trying to get healthy.

So here’s to Scott Garrelts. He had limitless potential, but he probably suffered from a workload that today’s teenagers wouldn’t dream of. And he wasn’t just unrealized potential – he did lead the league in ERA in a pennant-winning season, after all. Scott Garrelts: good Giant. Underappreciated Giant.

Though, really, all I wanted was an excuse to post this: 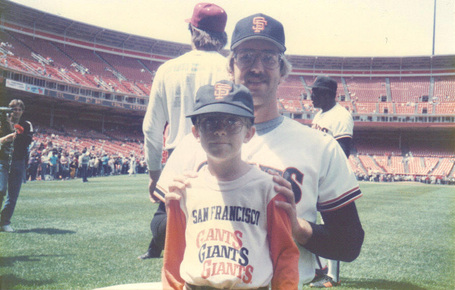 It’s like the start of a crappy time-travel movie. The protagonist rummages through a drawer at his parent’s house, only to find a picture of him with himself as a child! He can’t fathom what it means, until he’s visited by a sexy-yet-deadly NSA agent, who brings more questions than answers…. "Blade Runner" meets "Shawshank Redemption," and I hear that Chazz Palminteri is very interested for the part of Manny Trillo.

If you are sick enough to be interested in the rest of this series, you can find the first five installments here.