Share All sharing options for: With Burrell back...now what?

If the offseason ended today:

The rest of the offseason will be devoted to the last two spots in the bullpen. Are the Giants going to offer contracts to Chris Ray and/or Ramon Ramirez? Will Dan Runzler start the season in AAA as a staring pitcher, or will he break camp as a third lefty reliever? Will the Giants look forzzzznzzzkxzzzzzzz…zzxzzzz.

So that’s it. The offseason is essentially over. The Giants will need to figure out who their backup shortstop is, and they’ll need to settle the very back of the bullpen. That’s what’s left. They joy has been sucked from the offseason.

The $100M question and comment starter, then: Are you okay with the team as is? If these are your 2011 Giants, are you optimistic about the team? Before you answer, I’ll just leave this here: 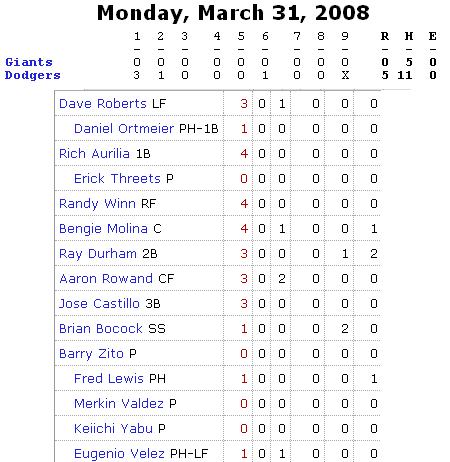 That’s how the 2008 season started, courtesy of Baseball Reference. There are so, so many things wrong with that boxscore. Thirty months later, there was a parade down Market Street. That Opening Day lineup was the underwear, and the World Series was the profit. I’m not going to dig too deep for an explanation.

So, yeah, I’m pretty okay with this roster. If Pablo can split the difference between his two seasons, the lineup would be pretty danged balanced.